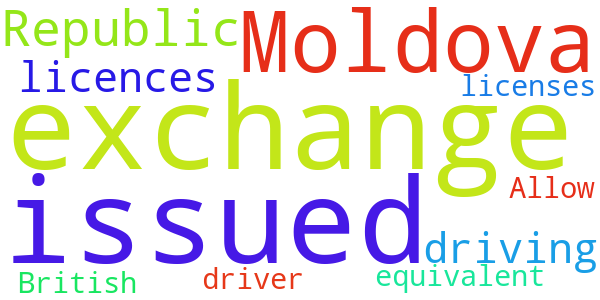 Exchange of driving licences issued in Republic of Moldova.

Exchange of driving licences issued in Republic of Moldova.

Allow the exchange of driver's licenses issued in the Republic of Moldova for the British equivalent.

The Government responded to this petition on Tuesday 20th April 2021

An application from Moldova was rejected in 2015 after the Department assessed the practical test in Moldova did not align with GB requirements. We have not received another application since.

People residing in GB with valid driving licences from outside the European Economic Area may drive small vehicles (motorcycles, cars, and vehicles up to 3500kgs or with up to eight passenger seats) for up to a year. After this time, to continue driving in GB, they must pass a driving test unless they hold a licence issued in a country or territory designated by law for the purpose of licence exchange. (Driver testing is devolved in Northern Ireland, but their standards closely align with those in GB and Northern Ireland is notified when any changes are made to GB legislation).

Drivers with a licence issued by a country or territory that has been designated for licence exchange purposes, can then exchange their licence for a GB licence. Details of the countries designated for exchange are set out here:
https://www.gov.uk/exchange-foreign-driving-licence/y/yes/car-or-motorcycle

Drivers with a licence issued by other countries must apply for a GB provisional driving licence and pass both a theory and practical driving test. This requirement is for road safety reasons, to ensure that drivers meet our high domestic standards.

Designation for licence exchange purposes is dependent on the testing and licensing standards in the country or territory being assessed as equivalent to those applied in GB. The work to assess the driver licensing regimes of countries that wish to be designated for driving licence exchange is carried out by the Driver and Vehicle Licensing Agency and the testing regimes of those countries are assessed by the Driver and Vehicle Standards Agency.

We will consider all applications for designation status made by national driver licence issuing authorities, including the government of Moldova.