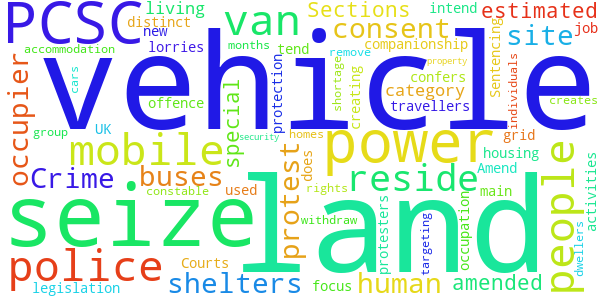 An estimated 60,000+ people are living off-grid in accommodation such as vans, cars, buses, lorries or other mobile shelters in the UK. The Police, Crime, Sentencing and Courts (PCSC) Bill should be amended to remove the power for police to seize their vehicles.

These people tend to group together for security and companionship, but their occupation of land is due to the housing and job shortage. It does not amount to creating a protest site. "Van dwellers" are distinct from "travellers" which is a category with special protection under human rights legislation. Nor are they "protesters", whose activities are the main focus of Sections 3 and 4 of the PCSC Bill. The Bill creates a new offence targeting individuals who "reside on land without consent of the occupier of the land; have, or intend to have, at least one vehicle with them on the land...and "confers power on a constable to seize their vehicle/other property for up to 3 months...".

The Government responded to this petition on Monday 26th July 2021

The provisions within Part 4 of the Police, Crime, Sentencing and Courts Bill are currently being debated in Parliament. The Government has no plans to remove the vehicle seizure power within Part 4.

The provisions within Part 4 of the Police, Crime, Sentencing and Courts (PCSC) Bill have passed through the House of Commons and are currently being debated in the House of Lords. The Government has no plans to remove the vehicle seizure power within Part 4.

The criminal offence we are introducing in the PCSC Bill will strengthen police powers to tackle unauthorised encampments where they are causing significant harm to those affected by them in specific conditions.

The conditions of the offence apply to those residing on land in or with a vehicle who cause significant damage, disruption, or distress and who do not leave when asked to do so. Those residing on land in a vehicle who do not cause significant harm will not be caught by the new offence. The high threshold to be caught by the offence helps ensure any enforcement action is proportionate.

The power for police to seize the vehicle and other property of a person committing the new offence ensures that enforcement action is effective.

Seizure powers are already conferred on police in relation to failure to comply with a police direction to leave land under the Criminal Justice and Public Order Act 1994. It is right that police should have an equivalent power in the context of the new criminal offence. The new offence requires a higher threshold for an offence to be committed before police would consider using seizure powers.

The seizure power is proportionate. We expect police decisions to arrest, and seize vehicles, to continue to be taken in consultation with the local authority where appropriate. The local authority would need to offer assurance that they have relevant measures in place to meet any welfare and safeguarding needs of those affected by the loss of their accommodation, before police take enforcement action.