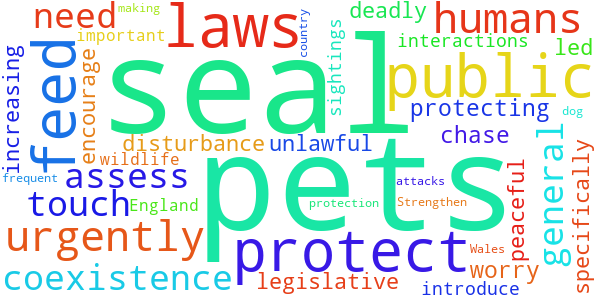 To introduce laws that specifically protect seals against dog attacks as well as disturbance from both humans and their pets, making it unlawful to touch, feed, chase or worry a seal in England and Wales.

Seal sightings are increasing across the country and this has led to more frequent and sometimes deadly interactions between the public and their pets. It is important to urgently assess the need for further legislative protection for seals to encourage the peaceful coexistence between the general public and wildlife.

The Government responded to this petition on Tuesday 19th October 2021

The UK Government recognises that disturbance by the public can be detrimental, and on occasion, fatal to seals. Work to explore the possibility of strengthening legislation is in early stages.

The UK has a strong track record in marine conservation, and places great importance in ensuring that the appropriate protection and management is in place for marine species. The UK is home to 38% of the world’s population of grey seals and 30% of the European subspecies of common seals. Both native grey seals and common seals species are currently protected in the UK under relevant wildlife legislation. Please refer to the following link for details:
https://www.gov.uk/government/publications/protected-marine-species/seals

For specific disturbance relating to dogs, there are several potential penalties that could apply to dog owners who do not keep their animals under control. It is an offence under section 3(1) of the Dangerous Dogs Act 1991 to allow a dog to be dangerously out of control. Under section 2 of the Dogs Act 1871, a magistrates' court may make any Order they consider appropriate to require an owner to ensure that their dog is kept under proper control. The Anti-social Behaviour, Crime and Policing Act 2014 also includes specific measures such as community protection notices to enable the police and local authorities to tackle irresponsible dog ownership. The Act also gives powers to local authorities to make public space protection orders to impose conditions on designated spaces such as excluding dogs or requiring them to be kept on leads.

Seals are vulnerable to any kind of human interactions, either deliberate or unintentional. The Government recognises that unintentional disturbance by members of the public can be detrimental and, on occasion, fatal to seals, and that greater public awareness is needed to protect these vulnerable marine mammals. Therefore, together with Seal Alliance, during the Spring we launched a new Government-backed campaign, ‘Give Seals Space’, to help raise awareness of the impact that human disturbance can have on seals and to help reduce it. As part of this campaign, we are providing funding for signs to be put up on the banks of the Thames to help raise awareness of the impact of disturbance on seals and the importance of keeping dogs under close control.

To deal with rising numbers of summer visitors to our coastlines, ‘Operation Seabird’ aims to tackle increases in disturbance to marine wildlife, including seals, by providing education and guidance to prevent wildlife disturbances from occurring and, to prosecute with the support of local police forces where necessary. Targeted ‘Days of Action’ involving Police, the Marine Management Organisation (MMO) and RSPCA, in partnership with other organisations, have been taking place along UK coastlines across the Summer to focus on specific concerns regarding marine life for that area. We are working with the MMO to understand how best to support this work.

The UK Government will continue to work with organisations such as the Seal Alliance, to identify opportunities to raise awareness and support efforts to minimise disturbance of seals. We are investigating what other actions could be taken to better protect seals, such as developing and distributing clear guidelines to boat operators, those partaking in recreational water sports, and the public. We will also be seeking to consult on the possibility of strengthening the protection of our wildlife in the upcoming Nature Recovery Green Paper.

This is a revised response. The Petitions Committee requested a response which more directly addressed the request of the petition. You can find the original response towards the bottom of the petition page (https://petition.parliament.uk/petitions/584224)