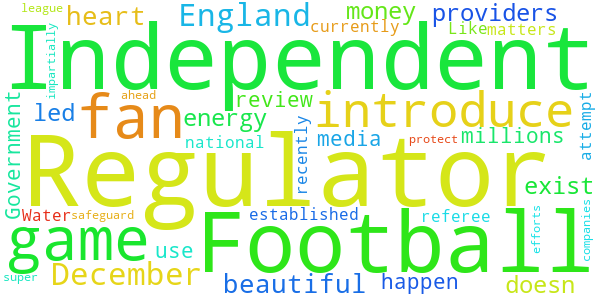 Introduce an Independent Regulator for Football in England by December 2021

Introduce an Independent Regulator for Football in England by December 2021

The Government should use the recently established fan led review of football to introduce an Independent Football Regulator in England to put fans back at the heart of our national game. This should happen by December 2021.

1. Like a referee, an independent regulator would safeguard our beautiful game impartially. This doesn’t currently exist.
2. An Independent Regulator could protect the game against another attempt at a super league or other efforts to put money ahead of fans.
3. Water companies, energy providers and the media all have an independent regulator. Football matters to millions and should also have a regulator of its own.

The Government responded to this petition on Monday 7th June 2021

Football clubs are the heart of local communities and have a unique social value, which is why we are proceeding with our commitment to undertake a wide ranging, fan led review of football governance.

As announced in the Secretary of State for Digital, Culture, Media and Sport’s Oral Statement on 19 April, Tracey Crouch MP is chairing a fan-led review of governance. She will engage extensively with fans to ensure their experiences are at the centre of the review. Fans are the lifeblood of the sport, and the Government is committed to ensuring that their views are at the heart of the review.

The Government has published the Terms of Reference and the members of the advisory panel, including representatives of fans, the women’s game, and non-league.

The first meeting of the advisory panel has been held, and fan engagement meetings with the Chair and panel are underway. The Government has announced that there will be an interim report from the review before the summer and a full report in the autumn.

The review will be a comprehensive examination of the English football system looking at issues of ownership, governance and funding through the football pyramid. This will include assessing calls for the creation of a single, independent football regulator to oversee the sport’s regulations and compliance, and its relationship with the regulatory powers of The Football Association and other football bodies.

It would not be right to pre-judge the recommendations of the review but the Government looks forward to receiving its report later in the year and acting on its recommendations accordingly.

This petition was debated in Parliament on Monday 14th June 2021