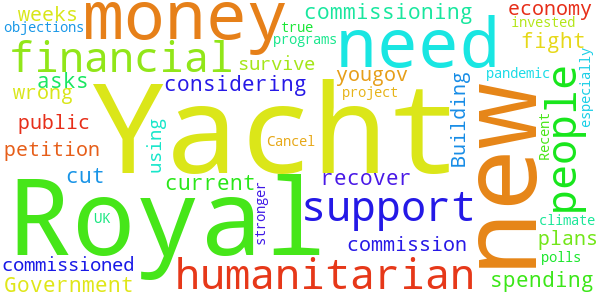 Submitted by James Hewitt-Thomas on Sunday 2nd May 2021

The Government is considering commissioning a new Royal Yacht in the next few weeks. This petition asks that the Yacht not be commissioned.

Building a new Royal Yacht using any public money is wrong. This is especially true in the current financial climate where spending on humanitarian programs has been cut as we fight to survive this pandemic. Money needs to be invested to recover our economy and support the people who need it.

Recent yougov polls also show there are stronger objections to the project in the UK than there is support.

The Government responded to this petition on Thursday 17th June 2021

The Government announced our intention to commission a National Flagship to promote British interests, trade and business. Its role will be distinct from that of any previous vessel.

On 30 May 2021, the Prime Minister announced that the Government will commission a new National Flagship to promote British interests and British businesses around the world. The National Flagship will be the first venture of this kind in the world and will showcase cutting-edge British skills, engineering and green technology while boosting trade and driving investment. Once built, the vessel will promote British diplomatic, security, commercial and trade interests overseas. The vessel will be used to host high level trade negotiations and trade shows.

As well as being a resource for the Government to support British firms looking to export globally, the ship will also be a tangible manifestation of British ingenuity and shipbuilding expertise. The Government’s intention is to build the ship in the UK. This will create jobs, help drive a renaissance in the UK’s shipbuilding industry and showcase the best of British engineering around the world.

As the country recovers from the pandemic, the Government is committed to building back better, supporting the key public services on which citizens and businesses depend, and working with industries, such as shipbuilding, to support employment in every region of the UK. The UK shipbuilding industry already makes a significant contribution to the UK economy, supporting skilled jobs around the UK. Ministry of Defence shipbuilding spend alone is estimated to support 25,200 direct jobs and 20,400 indirect jobs across the UK in 2019/20.

The name of the ship will be announced in due course. Its role will be distinct from that of any previous vessel, reflecting the UK’s new status as an independent trading nation and helping us to seize the opportunities that status presents.

The National Flagship will be an important part of the Refresh to our National Shipbuilding Strategy which we are planning to publish later this year. This will outline the Government’s plans for shipbuilding programmes and how we will set the conditions for a globally successful, innovative and sustainable shipbuilding enterprise.