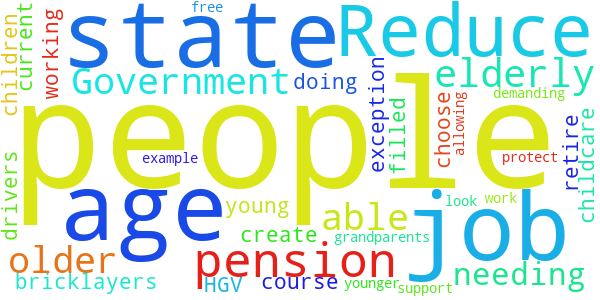 Reduce the state pension age to 63 for all

Reduce the state pension age to 63 for all

Reduce the state pension age to 63. Some jobs may not able to be done the older we get for example bricklayers, HGV drivers. Of course, there will always be an exception with some elderly people being more able than others.

The current state pension age is between 66 and 68, but the Government should look to reduce this to 63 for all.

The Government should be doing more to create jobs for young people by allowing older people to retire if they choose to at 63 so that these jobs can be filled by younger people.

This would also protect elderly people from needing to work if that job is too demanding. This would also free up grandparents to support their children with childcare when they are working.

The Government responded to this petition on Monday 27th September 2021

Successive governments and Parliaments have supported the increase in State Pension age (SPa). Reducing it to 63 is neither affordable nor fair to tax payers and future generations.

The latest Office for National Statistics data shows that the number of people over SPa compared to the number of people of working age is expected to increase. On average, people are living longer, and increasing SPa in line with life expectancy changes has been the approach of successive governments over many years. It helps to maintain the cost and sustainability of the State Pension in the long term.

Reducing SPa carries significant costs. Government has previously estimated that had we not increased SPa for both men and women, the total additional cost to taxpayers would have been around £215 billion for the period 2010/11 to 2025/26, in 2018/19 prices. This figure takes into account State Pension, other pensioner benefits, and savings made on working age benefits. The 2019 report that details these costs can be found here: https://www.gov.uk/government/publications/analysis-relating-to-state-pension-age-changes-from-the-1995-and-2011-pensions-acts/analysis-relating-to-state-pension-age-changes-from-the-1995-and-2011-pensions-acts

The Government is required by law to undertake a review of SPa every six years. The review will balance the need to make State Pension fair between generations and to taxpayers and sustainable in the longer term. The Government will publish the review by May 2023.

The Government has provided an unprecedented amount of support via our Plan for Jobs to help those of all ages find work and get the skills they need to return to work.

Our Plan for Jobs has been designed to deliver targeted support to those most in need, and we continue to provide tailored programmes for younger people who are unemployed. We have also built on our existing programmes by providing further support for young people during the pandemic. Since September 2020, the DWP Youth Offer has provided wrap-around support for 18 to 24 year olds in the Intensive Work search regime of Universal Credit. In addition, the £2 billion Kickstart scheme funds the direct creation of jobs for young people at risk of long-term unemployment giving them the chance to build their confidence and skills in the workplace, and to gain experience that will improve their chances of progressing to find long-term, sustainable work.

Since the launch of Kickstart in September, employers have created over 281,000 approved vacancies for young people, including engineering, construction, adult social care and retail and over 69,000 young people have started in their Kickstart job.

There is no robust evidence to show that older workers are less productive than younger workers, at least up to the age of 70, but we have launched a basic online mid-life MOT, which enables individuals to review their circumstances and plan for later life – this may mean re-skilling/re-training in a new sector, as well as reviewing their finances and taking stock of their health and wellbeing to ensure they have sufficient income to avoid poverty in later life.

The Government has worked hard to protect all age groups during the pandemic, working tirelessly to help get those who have lost their jobs back into work. For those who cannot work, our welfare system continues to provide a strong safety net.

Finally, the 2020 Court of Appeal judgment on SPa can be found here: https://www.judiciary.uk/judgments/the-queen-oao-delve-and-glynn-appellants-v-the-secretary-of-state-for-work-and-pensions-respondent