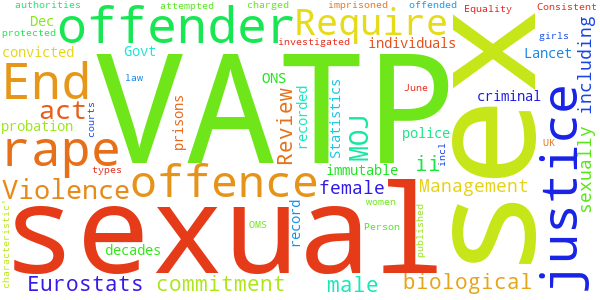 Submitted by Clare B Dimyon MBE on Monday 28th June 2021

The law should require that all authorities throughout criminal justice system (police, courts, prisons & probation) record the biological sex of all individuals investigated, charged, convicted, imprisoned for the offence types i) VATP & ii) "sexual offences" including rape & attempted rape.

VATP - Violence Against the Person

The Government responded to this petition on Thursday 14th October 2021

The Government does not plan to require biological sex to be recorded across the criminal justice system in this way. Policy is being developed in certain areas of demographic recording.

Policy responsibility for managing suspects and offenders is split between the Home Office (role of police) and the Ministry of Justice (courts, prisons and probation).

Currently, the Home Office does not centrally mandate how an offender’s sex or gender identity must be recorded by police. It is for each individual police force to decide what information to record. However, Home Office officials are working with the police to promote a standardized approach to recording basic demographic characteristics of victims and suspects of crime. This should bring greater accuracy and consistency of the recording of sex and gender identity.

Any such changes to police recording should influence how Her Majesty’s Courts and Tribunals Service (HMCTS) records offenders, since magistrates and Crown Courts use data supplied by the police.

Assuming that ‘biological sex’ is defined as the sex a person is assigned at birth, HMPPS’s position is as follows. Most people’s legal gender will remain the same as their sex as recorded at birth throughout their lives. The Gender Recognition Act 2004 allows transgender people who have (or have had) gender dysphoria, and intend to live in their acquired gender for the rest of their life, to change their legal gender. They can do this by obtaining a gender recognition certificate (GRC), which is in effect a replacement birth certificate. Section 9 of the Act states that:

Where a prisoner has a GRC, HMPPS will continue to record their legal gender, in line with the law. HMPPS will continue to manage prisoners with GRCs according to the Ministry of Justice (MoJ) and HMPPS policy framework: ‘The Care and Management of Individuals who are Transgender’, which is available at: https://assets.publishing.service.gov.uk/government/uploads/system/uploads/attachment_data/file/863610/transgender-pf.pdf.