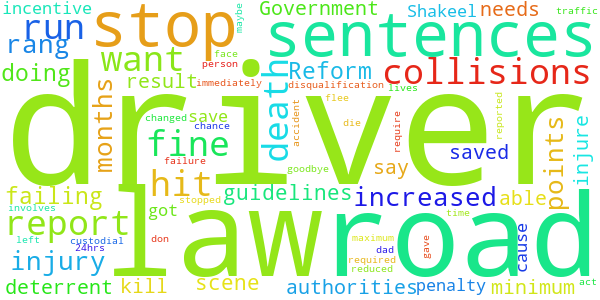 We want the Government to require that all traffic collisions be reported to the authorities immediately, and that minimum and maximum sentences for failure to stop at collisions that result in death or serious injury be increased.

By law you have up to 24hrs to report an accident on the road even if involves a person and can face 5 to 10 penalty points, disqualification for 6 to 12 months and up to a £5000 fine + up to 6 months custodial sentences.

The law can act as an incentive for drivers to flee scene if they kill/injure someone. I want sentences increased to be a deterrent from other drivers doing this and maybe we will be able to save lives on the road. And required report time reduced.

A hit-run driver left our dad in the road to die alone. If he had stopped and rang 999 he may saved him or gave us chance to say goodbye. He got a fine and 8 points for failing to stop and report. This guidelines needs to be changed for drivers who cause death/injury on road and don’t stop.

The Government responded to this petition on Tuesday 5th October 2021

The Government is committed to reducing road deaths. However, the offence of failing to stop should not be used as an alternative route to punish offenders for serious, but unproven offences.

Ministers are aware of the tragic circumstances surrounding the death of Shakeel Sheikh and extend their sympathy to family and friends.

The Government takes road safety seriously and is aware that in a small number of cases, the failure to stop and report may be related to an event which leads to the death or serious injury of another person. But, in the vast majority of cases, convictions for failure to stop are against drivers who have failed to stop, after causing minor property damage or low-level personal injury.

Failure to stop and report offences are often referred to as “hit and run”, but this is not an accurate reflection of the offence. The offence is designed to deal with behaviour relating to failing to stop, not as an alternative route to punish an offender for a more serious, but unproven offence.

Where there is evidence the driver caused harm, there is a range of offences for which the driver may be charged including causing death or serious injury from dangerous or careless driving. In these cases, the courts can treat the failure to stop as a further aggravating factor in the sentencing decision. Where there is evidence that the driver tried to frustrate justice or avoid detection, they may also be charged with perverting the course of justice, which carries a life sentence as a maximum penalty.

The Government takes this issue seriously. The Department for Transport is looking into the issue of such incidents of failure to stop resulting in death or serious injury and exploring whether there are further options that can be pursued.