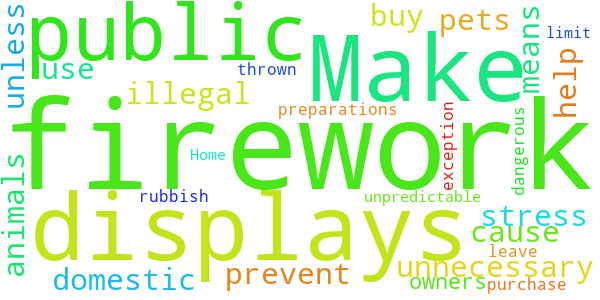 Make fireworks illegal to buy, with the exception of public displays.

Make fireworks illegal to buy, with the exception of public displays.

Make the purchase of fireworks illegal unless they are for public displays only.

The Government responded to this petition on Thursday 25th November 2021

The use of fireworks is an issue that the Government takes seriously. We believe that the majority of people who use fireworks do so responsibly.

The safe and responsible use of fireworks is an issue that the Government takes very seriously. We believe that the majority of people who use fireworks do so responsibly. The Government also believes that current legislation strikes the right balance allowing people to enjoy fireworks, whist reducing the risks and disturbances to both people and animals. There are, however, strong enforcement mechanisms in place to tackle situations when fireworks are used inappropriately.

Given this, the Government has no current plans to introduce further restrictions on the sale of fireworks to the public, but we continue to monitor the situation. We have concerns that banning the public from buying and using fireworks could have the unintended consequence of driving the market underground, leaving consumers vulnerable to unsafe products. We remain committed to taking further action to promote the safe and considerate use of fireworks, through our ongoing programme of work.

However, we do know that there is more we can do to provide information and promote the responsible use of fireworks. For that reason, the Office for Product Safety and Standards’ annual fireworks campaign includes messaging on how to use fireworks considerately, for example by letting neighbours know that you intend to use them at a certain time. This messaging was developed in partnership with animal welfare organisations, and we continue to engage with them on the key issues they face.


Many animal welfare organisations also publish advice for what actions pet owners can take when fireworks are set off in their local area. An example is this article published by the RSPCA; https://www.rspca.org.uk/adviceandwelfare/pets/general/fireworks.


The Government is also committed to tackling and preventing all forms of anti-social behaviour, including the misuse of fireworks. We know the serious impact that persistent anti-social behaviour can have on both individuals and communities. That is why we have provided police, councils, and other local agencies with a range of tools and powers that they can use to respond quickly and effectively to anti-social behaviour through the Anti-social Behaviour, Crime and Policing Act 2014.