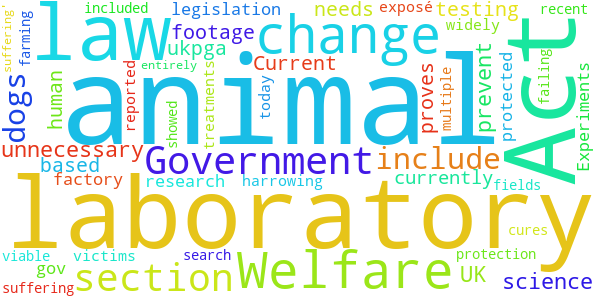 Change the law to include laboratory animals in the Animal Welfare Act.

Change the law to include laboratory animals in the Animal Welfare Act.

The Government needs to change the law so laboratory animals are included in the Animal Welfare Act. Laboratory animals are currently not protected by the Act and are therefore victims of 'unnecessary suffering' (see section 4 of the Act: https://www.legislation.gov.uk/ukpga/2006/45/section/4).

A recent exposé showed harrowing footage of the factory farming of laboratory dogs in the UK. Experiments on such dogs, and other animals, are today widely reported to be entirely failing the search for human treatments and cures.

Current science from multiple fields proves that animal-based research and testing is not viable. The Government should therefore change the law to include laboratory animals under the protection of the Animal Welfare Act, to prevent their unnecessary suffering.

The Government responded to this petition on Friday 20th August 2021

The Government believes animal use for research remains important and The Animals (Scientific Procedures) Act 1986 (ASPA) provides specific protection for these animals..

There is an explicit exclusion under the Animal Welfare Act 2006 (AWA), to provide for the legitimate conduct of procedures on ‘protected animals’ for scientific or educational purposes that may cause pain, suffering, distress or lasting harm. The use of animals in scientific research remains a vital tool in improving our understanding of how biological systems work both in health and disease. Such use is crucial for the development of new medicines and cutting-edge medical technologies for both humans and animals, and for the protection of our environment.

The Animals (Scientific Procedures) Act 1986 (ASPA) is the specific piece of legislation which provides protection for these animals:
https://www.gov.uk/government/publications/consolidated-version-of-aspa-1986

No animals may be used under ASPA if there is a validated non-animal alternative that would achieve the scientific outcomes sought. The protections for animals under ASPA include the need for three levels of licence for such procedures to occur, welfare standards which need to be met, and activities including inspection which assure compliance with ASPA. The Home Office is the department responsible for regulating the use of animals under ASPA. If any activity is found to be in breach of what is permitted under ASPA, then the AWA will apply.

Details of how these regulations are administered and operationalised are set out in the Guidance on the operation of the Animals (Scientific Procedures) Act 1986 (ASPA) available at:
https://www.gov.uk/guidance/guidance-on-the-operation-of-the-animals-scientific-procedures-act-1986.

The Government has a policy to limit the number of animals used in science through replacement, reduction, and refinement of research design – the ‘3Rs’. Applicants for licences must demonstrate that they have considered using non-animal alternatives as far as possible. Meanwhile the Government actively supports and funds the development and dissemination of techniques that replace, reduce and refine the use of animals in research (the 3Rs).  This is achieved primarily through funding for the National Centre for the 3Rs (NC3Rs), which works nationally and internationally to drive the uptake of 3Rs technologies and ensure that advances in the 3Rs are reflected in animal research policy, practice and regulations.  NC3Rs has committed £100 million. This includes almost £27 million in contracts through its CRACK IT Challenges scheme to UK and EU-based institutions, mainly focusing on new approaches for the safety assessment of pharmaceuticals and chemicals that reduce the use of animals.

From the 22 completed CRACK IT Challenges, 12 new products and services have been delivered for industrial and academic end-users. These include miniature wireless devices for recording neural activity in mice; novel human-relevant microphysiological systems and organ on-a-chip platforms for kidney, cardiac and neuronal toxicity assessment; and AI/ in silico modelling platforms for infection, welfare monitoring and toxicology studies. The MHRA work closely with the NC3Rs, bringing together stakeholders in academia, industry, government and animal welfare organisations to facilitate the exchange of information and ideas, and the translation of research findings into practice that benefits animals and science.

To conclude the Government has no plans to amend the Animal Welfare Act (2006). We consider enabling the properly regulated use of animals in science is essential to improving the health and lives of humans and animals and to the safety and sustainability of our environment. Underpinning this is a strong commitment to a rigorous regulatory framework that fully implements the 3Rs and the continued development of non-animal alternatives.