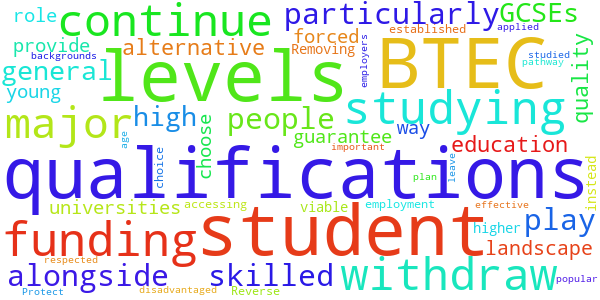 Protect student choice: do not withdraw funding for BTEC qualifications

Protect student choice: do not withdraw funding for BTEC qualifications

Reverse the plan to withdraw funding for most applied general qualifications such as BTECs and guarantee they will continue to play a major role in the qualifications landscape. Students should not be forced to choose between studying A levels or T levels from the age of 16.

For many young people, studying BTECs will continue to be the most effective way of accessing higher education or skilled employment. These well-established, high quality qualifications are popular with students and respected by employers and universities. They can be studied alongside, or instead of, A levels and provide an important alternative to T levels. Removing BTECs will leave many students without a viable pathway after their GCSEs, particularly those from disadvantaged backgrounds.

The Government responded to this petition on Tuesday 17th August 2021

The Government is streamlining and improving the quality of post-16 qualifications. We will fund a range of qualifications in addition to T Levels and A levels, which may include some BTECs.

The case for change is strong. For too long we have allowed too many young people to leave education without the skills employers need. The Wolf Review (2011) found that the content of many technical qualifications was not valued by employers and provided little value to students. Similarly, the Sainsbury Review (2016) found that employers continue to report that many individuals who have successfully completed qualifications remain poorly equipped to enter skilled work. Now more than ever as we recover from the pandemic, we need students to finish education well equipped to progress to further training or to get a skilled job, allowing businesses to recover and thrive.

Our reforms to level 3 qualifications will strengthen pathways to progression, creating clearly defined academic and technical routes centred around A levels and T Levels with qualifications leading to further study, and/or skilled employment. This clarity of purpose will provide students with a range of good options and allow them to see more easily how their study will help them to progress.

We recognise that some students do not always know what they want to do at 16 and that is why we need outstanding information, advice and guidance to support them to make good choices. Others may also need to study in different ways in the future such as accessing T Levels through the newly launched T Level Transition Programme. We will explore how to support students who need additional support before they are ready for A levels and other academic qualifications at level 3 through a consultation on level 2 and below qualifications later this year.