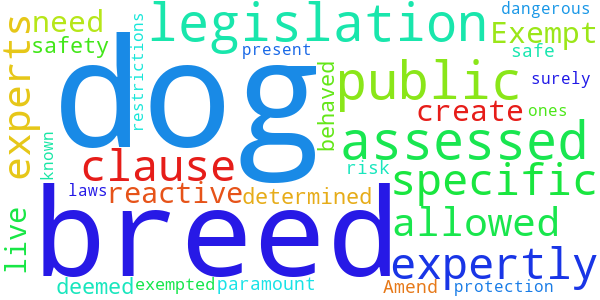 There are many dogs that are known to be reactive, but it is at present determined by breed if a dog is deemed to be dangerous. Public safety must always be paramount, BUT dogs that have been expertly assessed and found to be well behaved, surely are not the ones that need restrictions for public protection.

The Government responded to this petition on Thursday 12th August 2021

The Dangerous Dogs Act places restrictions on certain types of dogs bred for fighting. Individual dogs can be kept under strict conditions if a court judges that they are not a risk to public safety.

The statutory Code of Practice for the Welfare of Dogs provides owners with information on how to provide for their dog’s natural needs as required by the Animal Welfare Act 2006. The Code of Practice clearly sets out that all dogs need to be trained to behave well, ideally from a very young age and should be introduced gradually and positively to different environments, people and animals.

In this country, pit bull types have been traditionally bred for dog fighting to accentuate any aggressive tendencies and therefore the Government considers that they pose an inherently greater risk to the public. We fully recognise that pit bull terriers are crossbreeds, which is why we refer to them as “type” rather than “breed” and base identification on physical characteristics. Identification of pit bull terriers is made by Dog Legislation Officers who are police officers specially trained to recognise the four prohibited type dogs.

The Government considers that a lifting of the restrictions on these types of dogs would more likely result in an increase in dog attacks, rather than contributing to any reduction in such incidents.

Despite the general prohibitions on these types of dog, individual prohibited dogs can be kept by their owners if a court judges that the dog is not a danger to the public, that the dog can be kept in a suitable environment, and that the proposed owner is a fit and proper person. If the court considers these criteria to be met, the dog can be listed on the Index of Exempted Dogs and must be kept under strict conditions, including being on a lead and muzzled in public.

Under section 3 of the 1991 Act, it is an offence to allow any dog to be dangerously out of control. For the purposes of the 1991 Act, this includes any occasion on which there are grounds for reasonable apprehension that the dog in question will injure someone, whether or not it actually does so. The maximum penalty for such an offence is fourteen years’ imprisonment if it results in the death of a person; five years in the case of injury; three years if it is an attack on an assistance dog and six months where no injury is caused to a person or assistance dog.

Defra has commissioned further research in collaboration with Middlesex University to look at responsible ownership across all breeds of dog. The research will consider different approaches and the effectiveness of current dog control measures. The report will be published later this year.