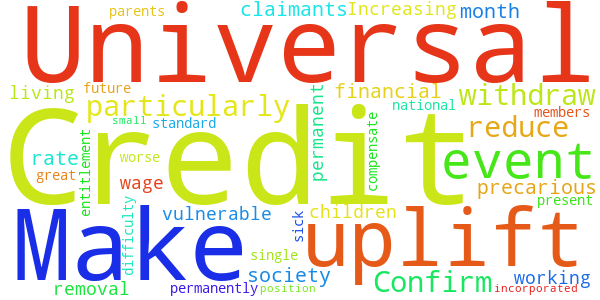 Make the £20 per week uplift to Universal Credit permanent.

Make the £20 per week uplift to Universal Credit permanent.

To withdraw it will make the already precarious financial position of the most vulnerable members of our society, particularly those who cannot, or have great difficulty working, such as the sick and single parents of small children, much worse. Increasing the national living wage will not compensate for its removal, and in any event will reduce entitlement to Universal Credit.

The Government responded to this petition on Monday 20th September 2021

The Government always intended the £20 per week increase to be a temporary measure, connected to support during the COVID-19 pandemic. It will not be incorporated permanently into the standard rate.

Since the start of the pandemic, the Government’s priority has been to protect lives and people’s livelihoods. This includes continually supporting individuals and businesses.

That is why the Chancellor announced in the Spring Budget that the temporary £20 a week increase in Universal Credit was to be extended for a further six months, until October, with eligible Working Tax Credit claimants receiving a one-off payment of £500.

Once the uplift is removed, the Universal Credit award received by claimants will not include the additional £20 per week.

The Government has always been clear that the £20 increase was a temporary measure to support households affected by the economic shock of Covid-19.

Universal Credit has provided a vital safety net for six million people during the pandemic, and we announced the temporary uplift as part of a COVID support package worth a total of £407 billion in 2020-21 and 2021-22.

There have been significant positive developments in the public health situation since the uplift was first introduced, particularly the success of the vaccine rollout.

Now, with restrictions eased and we are ramping up our recovery, the Government is rightly shifting its focus to supporting people to move into and progress in work as quickly as possible. This is based on clear evidence about the importance of employment, particularly where it is full-time, in substantially reducing the risks of poverty. In 2019/20, there was only a 3% chance of children being in absolute poverty (before housing costs) if both parents work full-time compared with 42% for two-parent families with only part-time work.

In 2019/20, working age adults in households where all adults were in work were six times less likely to be in absolute poverty (after housing costs) than adults in a household where nobody works.

With hundreds of thousands of vacancies in our labour market, opportunities are out there. We have recruited an additional 13,500 frontline Work Coaches to help support people of all ages to find a job, retrain or gain vital practical experience.

Through our Plan for Jobs, we are targeting tailored support schemes of people of all ages to help them prepare for, get into and progress in work. These include: Kickstart, delivering tens of thousands of six-month work placements for Universal Credit claimants aged 16-24 at risk of unemployment; and introduced Restart which provides 12 months’ intensive employment support to Universal Credit claimants who are unemployed for a year. Our Plan for Jobs interventions will support more than two million people.

This Government is wholly committed to supporting those on low incomes, and continues to do so through many measures, including by increasing the living wage, and by spending an estimated £111 billion on welfare support for people of working age in 2020/21.