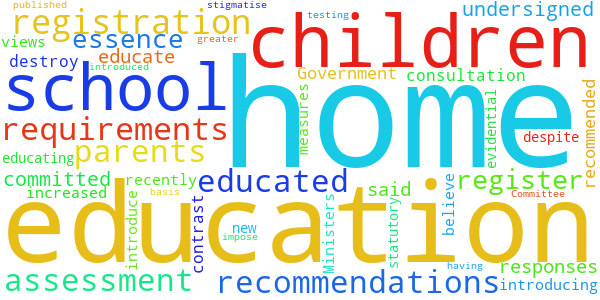 The Education Committee has recently recommended introducing a statutory home educated register, and greater assessment of home educated children. These recommendations are in contrast to the views of many parents who home educate.

Ministers have said they are committed to a registration system for children who are not in school, despite not having published responses to a 2019 consultation on children not in school.
We believe there is no evidential basis for increased requirements for home education, for registration, assessment or testing. If introduced, these recommendations could stigmatise and even destroy the very essence of home education: it is not school. We, the undersigned, call upon the Government not to introduce any such measures.

The Government responded to this petition on Friday 20th August 2021

The Government remains committed to a registration system for Children Not in School (CNIS). Further details will be set out in the Government’s upcoming response to its CNIS consultation.

The Education Select Committee is a Parliamentary Committee, independent of Government and its recommendations are not Government policy. Government acknowledges the recently published House of Commons Education Committee report on ‘Strengthening Home Education’ (published on 26 July) and is currently considering its response to the Committee’s recommendations, which we will provide to the Committee in due course. The Department will always consider the views of stakeholders alongside a broad range of evidence when developing elective home education policy.

We fully support the right of parents to educate their children at home and most who do so educate their children very well, sometimes in challenging circumstances. However, while many home educated children will be receiving a very good education by dedicated parents, who deserve support, there will be others who are deemed to be ‘home educated’ but, in reality, most or entirely all of their education is through attendance at unsuitable settings, such as illegal unregistered independent schools. There is also likely to be a number of children for whom the education being provided is unsuitable, because their parents cannot educate them effectively at home or the child is simply not being educated.

With the interests of these vulnerable children in mind, we therefore in April 2019 launched a consultation on proposals to introduce local authority registers of children not attending registered independent or state-funded schools, and support for home-educating families (should they want it). This closed on 24 June 2019.

The Government’s intention with these proposals has always been to ensure that they do not impede those families who are genuinely, and through choice, educating their children at home. The consultation, unlike the Education Select Committee’s report, did not feature any proposals for local authorities to have explicit monitoring or inspection powers. With increasing numbers of children now being educated outside school there is, however, a greater need for local authorities to be able to identify these children, in order to assure themselves about the education being provided; and to offer support to those home educating parents that would like it.

We remain committed to a registration system for children not in school. A registration system will help local authorities undertake their existing duties, as well as help safeguard all children who are in scope. Further details on this, as well as on proposals for supporting home-educating families, will be in the Government’s response to the children not in school consultation, which we will publish in the coming months.