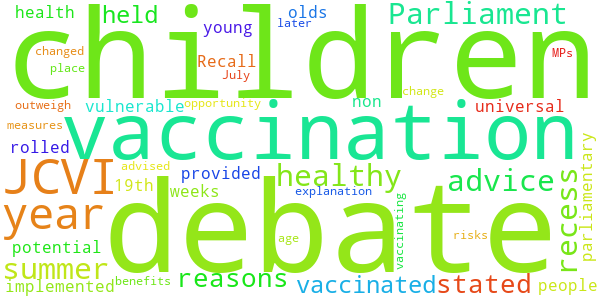 Parliament should debate vaccination of children, before any healthy children are vaccinated. A full explanation of the reasons for the change in the JCVI's advice should be provided for the debate. No vaccinations of non-vulnerable children should take place until after the debate has been held.

On 19th July JCVI stated that health benefits of universal vaccination in children and young people below the age of 18 years do not outweigh the potential risks. 2 weeks later JCVI have advised vaccinating healthy 16-17 year olds. This advice changed during the parliamentary summer recess, therefore MPs have had no opportunity to debate before the measures are implemented.

The Government responded to this petition on Tuesday 2nd November 2021

Government evaluated evidence and assessed expert opinion before deciding to routinely vaccinate children and young people. MPs had the option to be briefed and raise questions during an All MP call.

The Government can request that the Speaker recall the House to debate events of major national or international importance, as it did for the recall of 18 August in relation to the situation in Afghanistan. The Speaker must then decide whether the public interest requires that the House meets. The Government did not consider that the Joint Committee on Vaccination and Immunisation (JCVI) advice met the high bar for such a request. A written ministerial statement (WMS) was laid on this issue at the earliest possible opportunity once the House had returned. In the meantime, a letter was written to the chairs of the Public Accounts and Health and Social Care Committees and a letter sent to all MPs in England informing them of the JCVI advice. Additionally, the former Parliamentary Under-Secretary of State for Prevention, Public Health and Primary Care, Jo Churchill MP, held an all-MP call on the day of the announcement to ensure MPs were fully briefed and had the opportunity to ask questions. Once the House had returned, backbenchers had the opportunity to bid for debates on the matter in backbench time.

Vaccines used in the UK must be authorised by the Medicines and Healthcare products Regulatory Agency (MHRA). This independent regulator decides which vaccines may be prescribed within the UK and which individuals or groups of individuals may receive them. Any prescriber (doctor) is free once a vaccine is authorised by the MHRA to prescribe it. Pfizer and Moderna are now authorised for those aged 12-17 years by the MHRA. Rather than a matter for Parliament, authorisation of a vaccine is a matter for the regulator, and prescribing an authorised vaccine is then a matter of individual clinical judgement.

Once vaccines are authorised by MHRA, the Government decides whether they should be prioritised for use in the NHS, and if so for which groups. The JCVI is the independent body made up of scientists and clinical experts who provide advice to Government on immunisations for the prevention of infections and/or disease following due consideration of the evidence on the burden of disease, on vaccine safety and efficacy and on the impact of immunisation strategies.

All those aged 16-17 who are at risk of serious outcomes from COVID-19, or at high risk of transmitting the virus to vulnerable people, including those who are employed in, studying or in training for health and social care work, have already had the opportunity to be vaccinated. They were included in Phase One of the adult programme, which began in December 2020.

Throughout the pandemic, the JCVI has kept its advice on the use of COVID-19 vaccines under review as more safety and effectiveness data becomes available. JCVI set out in its advice to the Health Secretary on 2 July 2021 (published on 19 July) that after consideration of current data they recommended that vaccination be offered additionally to defined ‘at risk’ groups of 12-15 year olds. This advice follows JCVI’s deliberations on the potential risks and benefits of vaccinating persons aged 12 to 17-years-old, taking into consideration the latest available data.

On 4 August 2021, in further advice, JCVI concluded that data accrued since they had provided their initial advice on 2 July 2021 now suggested that the balance of risks and benefits was in favour of offering those aged 16 and 17 their first dose of COVID-19 vaccination. Therefore, the JCVI currently advises that all 16-17 year olds should now be offered their first dose of the Pfizer vaccine. The Government has accepted this advice. Parliamentary approval is not a requirement of any decisions the Government makes on vaccination priorities including for COVID-19. Each new decision the Government makes on COVID-19 vaccination priorities is however notified to Parliament via a written ministerial statement, which cannot be laid during a parliamentary recess period.

When formulating advice in relation to childhood immunisations, including COVID-19 vaccinations, the JCVI has consistently held that the main focus of its decision should be the benefit to children and young people themselves, weighed against any potential harms. Any government decision on deployment of vaccines has and will also continue to be made on the basis that the benefits of vaccination outweigh the risks to those people who are vaccinated. Health is a devolved matter and the Government continues to work closely with the Devolved Administrations to ensure successful delivery across the whole of the UK.

Department for Health and Social Care

This is a revised response. The Petitions Committee requested a response which more directly addressed the request of the petition. You can find the original response towards the bottom of the petition page (https://petition.parliament.uk/petitions/594272)