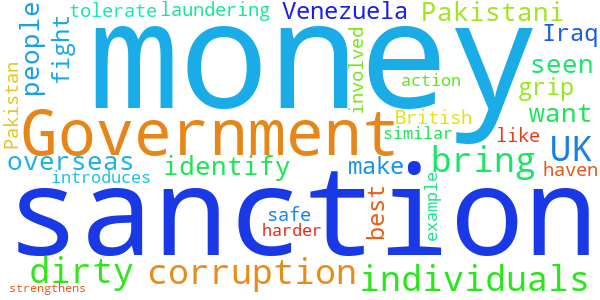 Identify and sanction any Pakistani individuals involved in money laundering

Identify and sanction any Pakistani individuals involved in money laundering

We would like the Government to identify and sanction any Pakistani individuals who bring “dirty money” from overseas, similar to sanctions on individuals from Iraq, Venezuela etc. The Government has to fight harder to keep dirty money out of the UK.

The Government responded to this petition on Monday 13th September 2021

The Government will continue to consider individuals and entities under the Global Anti-Corruption sanctions regime, guided by the purposes of the Regulations to prevent and combat serious corruption.

On 26 April, the UK Government established the Global Anti-Corruption sanctions regime which gives the UK powers to impose sanctions on those involved in serious corruption around the world. This marked a significant step forward for the UK’s global leadership in combating corruption and promoting fair and open societies.

As set out in the Regulations, the activities covered by the Global Anti-Corruption sanctions regime are bribery and misappropriation, plus a range of different kinds of involvement in such bribery or misappropriation. The Regulations contain powers to impose sanctions for money laundering activities relating to bribery or misappropriation. A person can be sanctioned if they conceal or disguise - or facilitate the concealment or disguise of - serious corruption or its proceeds, or transfers or converts any proceeds from serious corruption. The full details of the Regulations can be found here: https://www.legislation.gov.uk/uksi/2021/488/contents/made

The UK Government keeps all evidence and potential designations under close review, however it would not be appropriate to speculate about future sanctions targets as to do so could reduce their impact.

The UK Government has also published an information note for non-government organisations with information about what the Global Anti-Corruption sanctions regime aims to do and what it covers. It also explains the information needed when the UK government considers those who may be designated under this regime. The note can be found here: https://www.gov.uk/government/publications/global-anti-corruption-sanctions-information-note-for-non-government-organisations

In the context of Pakistan, the UK is acting robustly to tackle corruption and illicit finance. The British High Commission in Islamabad works constructively with the Government of Pakistan and relevant law enforcement agencies to build capabilities in targeting, investigating and prosecuting financial crime. Such cooperation has previously delivered the successful repatriation of a multimillion-pound settlement back to Pakistan.

The UK is committed to Pakistan’s long-term economic development. Countering corruption and tackling illicit financing is a key part of that process. Our overall goal remains to see a stable and prosperous Pakistan and wider region.