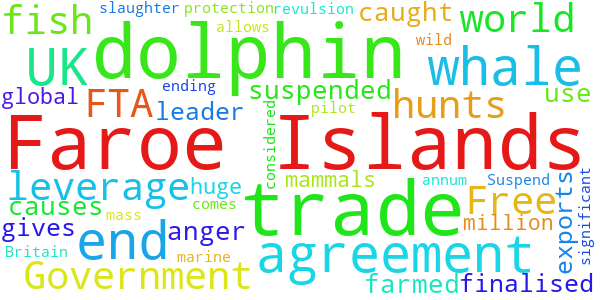 In 2019 UK Government finalised a free trade agreement (FTA) with Faroe Islands which allows for £100 million of exports of wild caught and farmed fish to Britain per annum (20% of the Faroe Islands global trade). This FTA should be suspended until all whale & dolphin hunts on Faroe Islands end

The Free Trade Agreement with the Faroe Islands gives the UK Government significant leverage when it comes to ending the mass slaughter of pilot whales and dolphins on the Faroe Islands which causes huge anger and revulsion around the world. If the UK is to be considered a world leader in the protection of marine mammals it must use this leverage now

The Government responded to this petition on Tuesday 26th October 2021

The UK strongly opposes the hunting of cetaceans and is committed to upholding high animal welfare standards in its trade relationships. We continue to urge the Faroe Islands to stop cetacean hunts.

The UK plays a leading role in championing the conservation and welfare of all cetaceans (whales, dolphins and porpoises) and is an active member of the International Whaling Commission (IWC). We strongly believe that the hunting of cetaceans is unacceptably cruel, and that responsible tourism is the only truly sustainable interaction with these animals.

Lord Goldsmith has written to Jacob Vestergaard, the Faroese Minister for Fisheries, to express the UK’s opposition to the killing of cetaceans in the Faroe Islands, with particular reference to the hunt of 1,428 Atlantic white-sided dolphins that took place on the 12th September. UK officials have also raised concerns through diplomatic channels including through the IWC.

The UK welcomes the Faroese Prime Minister’s announcement that his government will start an evaluation of regulations on the catching of Atlantic white-sided dolphins and review closely the part these hunts play in Faroese society. UK Ministers will continue to engage with the Faroese Government throughout this evaluation process.

By having strong diplomatic and economic relationships with partners, we are able to have open discussions on a range of issues. The UK will continue advocating at every appropriate opportunity, included those provided by our Trade Agreement, for the end of cetacean hunts in the Faroe Islands.