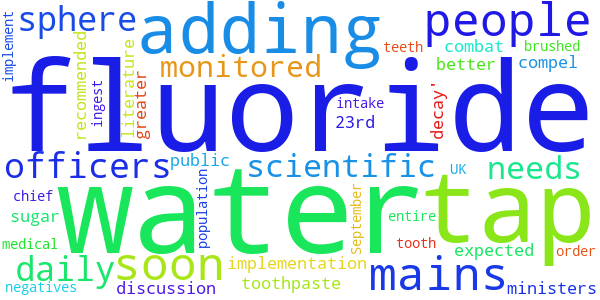 Do not put fluoride in all tap water.

Do not put fluoride in all tap water.

On the 23rd of September 2021, the UK's four chief medical officers recommended adding fluoride to all tap water 'in order to combat tooth decay'. It is expected that ministers will soon implement this.

There is however, scientific literature on the negatives of adding fluoride to mains water.

It would be better if people brushed their teeth with toothpaste daily and monitored to intake of sugar, rather than compel the entire population to ingest fluoride.

There needs to be greater discussion of this in the public sphere before implementation.

The Government responded to this petition on Thursday 14th October 2021

Water fluoridation is a safe and effective public health measure to improve oral health. Public consultation will be an important part of the process ahead of introducing any new schemes.

Tooth decay is a significant public health problem in England, yet it is largely preventable. Poor oral health impacts people of all ages and their carers. It can cause pain and suffering and affect an individual’s ability to function in and enjoy day to day life. It can affect children’s ability to learn, thrive and develop and in older and more vulnerable populations, poor oral health may ultimately impede their ability to nourish themselves and communicate.

It also has an economic impact. More frequent visits to the dentist means absence from school and from work for patient parents, guardians or carers and for adults themselves when they need treatment. In addition, there is an impact on the NHS. For, example, in 2019-20, 35,190 children aged 0-19 years in England were admitted to hospital for the extraction of decaying teeth, the cost of which was estimated to be £54.6 million. The vast majority will be preventable and will be diverting much needed NHS resources away from other areas.

Fluoride is naturally present throughout the natural world including in water supplies and in some foods. There are also areas of the country where levels of fluoride in drinking water are naturally at similar levels to those seen in artificial fluoridation schemes

Global research and monitoring of the effects of water fluoridation specifically in England demonstrates the benefits of this public health measure. We have known since the 1930s that access to fluoride in drinking water is associated with a reduced level of dental decay. There has been a large volume of individual studies published since this was first discovered using a wide variety of research methods. Recent reviews of this extensive scientific literature, by a number of authoritative bodies across the world, have concluded that levels of tooth decay are lower in fluoridated areas and that there is no credible scientific evidence that water fluoridation is harmful to health.

Water fluoridation, which has both topical and systemic effects, is the only intervention to improve dental health that does not require sustained behaviour change over many years. It is therefore particularly beneficial for individuals and communities at increased risk of tooth decay, such as those from more deprived backgrounds and other vulnerable groups including those with physical or mental disability that prevent them from effectively caring for their teeth.

The benefits are clear, however it remains important that those people in areas where new schemes are proposed are effectively consulted. That is why the Health and Care Bill, which will give Secretary of State the power to directly introduce, vary or terminate water fluoridation schemes also provides that populations will continue to be consulted on any proposed new schemes.