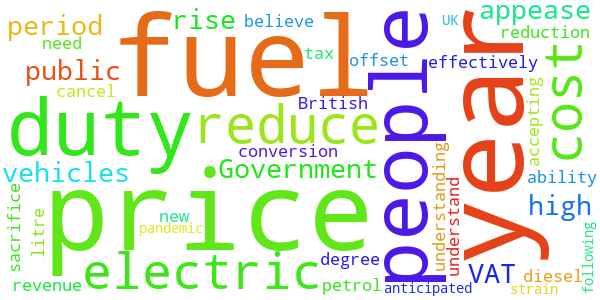 The Government should reduce the cost of fuel through a reduction of 40% in fuel duty and VAT for 2 years. This can effectively offset the rise in fuel prices since 2020.

The price of diesel and petrol is at an 8-year-high. While the people are accepting the conversion to electric vehicles, the anticipated 30% + rise in fuel costs along with the price of new electric vehicles is a strain for the UK public. We believe people may understand to a degree the need for tax following the pandemic however prices of £1.50 or more per litre will cancel out any understanding. The Government has the ability to sacrifice some revenue to appease the British public.

The Government responded to this petition on Wednesday 17th November 2021

The Government is taking targeted action to help families across the UK with the cost of living, which includes freezing fuel duty in 2022-23, the twelfth consecutive year.

Recognising that fuel is a major cost for households and businesses, the Government announced at the recent Autumn Budget that fuel duty rates would remain frozen at 57.95 pence per litre in 2022-23. As a result of twelve consecutive years of frozen fuel duty rates, the average UK car driver will have saved a cumulative £1,900 by the end of 2022-23, compared to the pre-2010 escalator. This is part of wider targeted action to help with the cost of living. A freeze already represents a cut in real terms and comes at a cost to the Exchequer of almost £8 billion over the next five years. Revenues from fuel duty help to fund essential services, like our schools and the NHS. It is important that we safeguard those revenues for the sake of our first-class public services.

Regarding VAT, this is a broad-based tax on consumption and the 20 per cent standard rate applies to most goods and services including road fuel. While there are exceptions to the standard rate, these have always been limited by both legal and fiscal considerations.

Whilst the rationale of this petition is appreciated, any reform to the current VAT treatment of road fuel would carry a significant cost to the Exchequer, and this should also be seen in the context of the over £50 billion of requests for reliefs from VAT received since the EU referendum. Such costs would have to be balanced by increased taxes elsewhere, increased borrowing or reductions in Government spending. Given this, there are no current plans to change the current VAT treatment of road fuel.