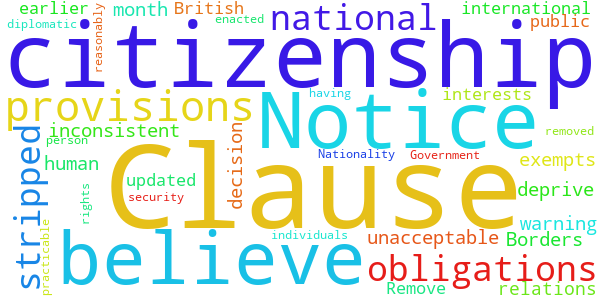 Remove Clause 9 from the Nationality and Borders Bill

Remove Clause 9 from the Nationality and Borders Bill

Under provisions in Clause 9 of this Bill, individuals could be stripped of their British citizenship without warning. We believe this is unacceptable, and inconsistent with international human rights obligations.

Clause 9 of the bill, “Notice of decision to deprive a person of citizenship,” which was updated earlier this month, exempts the Government from having to give notice if it is not “reasonably practicable” to do so, or in the interests of national security, diplomatic relations or is otherwise in the public interest.

We believe these provisions should be removed before this Bill is enacted.

The Government responded to this petition on Wednesday 5th January 2022

The Government will not remove Clause 9. It is necessary to ensure deprivation powers can be used effectively and will only apply in very limited circumstances. It does not affect the right to appeal.

Clause 9 of the Nationality and Borders Bill removes the requirement to give notice of a decision to deprive a person of citizenship in certain limited circumstances. The clause also has retrospective effect so that where a decision to deprive has already been made but not notified to the person, the deprivation order stemming from that decision remains valid. This provision strikes the right balance between the rights of the individual and the aims of the policy to keep the public safe.

The Government recognises that to deprive someone of British citizenship is a very serious matter and it is a power reserved for those whose conduct poses a threat to the UK, involves very high harm, or where citizenship has been obtained by fraudulent means and so the person was never entitled to it in the first place. Deprivation on ‘conducive to the public good’ grounds is rare, has been possible for over a century, comes with a right of appeal and is used against people like terrorists to keep the public safe. Such decisions are therefore made following careful consideration of advice from officials and lawyers and in accordance with domestic and international law as well as the UN Convention on the Reduction of Statelessness. Clause 9 doesn’t change any of that. It is simply about how someone is notified. It cannot be right that the proper functioning of the immigration and nationality system is impeded because an individual has removed themselves from contact with the Home Office, or they are in a war zone where they cannot be contacted, or where to make contact would disclose sensitive intelligence sources.

This clause is therefore necessary to avoid the situation where we could never deprive a person of their British citizenship just because it is not practicable, or not possible, to communicate with them. Preserving the ability to make decisions in this way is vitally important to preserve the integrity of the UK immigration system and to protect the security of the UK from those who would wish to do us harm.

However, the Government wishes to make clear that it does not intend to deny a person their statutory right of appeal where a decision to deprive has been made. The amendment to section 40A of the British Nationality Act 1981 preserves the right of appeal in cases where the notice of a decision to deprive has not been given to the person as their current whereabouts are unknown. Once a person makes contact with the Home Office, they are given a copy of the deprivation decision notice. They can then seek to exercise their statutory right to appeal against that decision.

The Government is not extending deprivation powers through the inclusion of this measure and is not denying a person their statutory right of appeal where a decision to deprive has been made. The proposed amendment preserves this right. The change is simply intended to ensure existing powers can be used effectively in all appropriate circumstances and does not in any way represent a policy change in this important area of work.

The Petitions Committee has decided not to schedule a debate on this petition.

Follow progress of the Nationality and Borders Bill: https://bills.parliament.uk/bills/3023