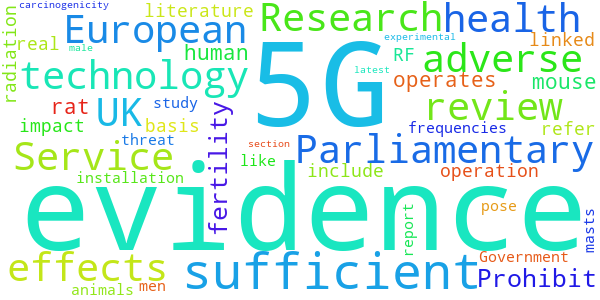 Prohibit 5G technology in the UK

Prohibit 5G technology in the UK

On the basis of the European Parliamentary Research Service's latest study of the health impact of 5G, I would like the Government to prohibit 5G technology in the UK. This should include the installation and operation of 5G masts.

5G operates at frequencies that could pose a real threat to human health.

A literature review by the European Parliamentary Research Service found " is sufficient evidence in experimental animals of the carcinogenicity of RF radiation" (please refer to 6.1 in the linked report.

The Government responded to this petition on Friday 1st July 2022

In relation to 5G, UKHSA has said that the exposure to radio waves is expected to remain low relative to international guidelines and, as such, there should be no consequences for public health.

The UK Health Security Agency (UKHSA) is aware of the European Parliament’s report and of reports and opinions developed by a range of national and international health authorities on the same health topics. UKHSA monitors the emerging evidence and provides advice on the public health aspects of exposure to radio waves, including those from 5G communications systems. The European Union’s own scientific expert committees have published five multidisciplinary expert reviews of the evidence to date, and a sixth is presently being prepared by the Scientific Committee on Health, Environmental and Emerging Risks (SCHEER). A plain language summary published alongside the fifth (2015) review explains that “the results of current scientific research show that there are no evident adverse health effects if exposure remains below the levels set by current standards.”

UKHSA’s advice in respect of 5G remains unchanged and states in summary: “It is possible that there may be a small increase in overall exposure to radio waves when 5G is added to an existing network or in a new area. However, the overall exposure is expected to remain low relative to guidelines and, as such, there should be no consequences for public health.”

Central to UKHSA’s advice are the guidelines published by the International Commission on Non-Ionizing Radiation Protection (ICNIRP), which is formally recognised by the World Health Organization. The ICNIRP guidelines underpin health protection policies at UK and European levels.

The ICNIRP issues guidelines on human exposure to electro-magnetic fields (EMF), based upon the consensus view of a large amount of research carried out over many years. This includes the frequencies used by 5G and all other mobile / wireless technologies. Over the last two decades there have been over 100 expert reports on EMF and health published internationally with well over 3,000 studies informing these reviews and the existing scientific exposure guidelines.

The control of exposures occurs through product safety legislation, health and safety legislation and planning policy. These regulatory areas all consider the international guidelines. Ofcom spectrum licence conditions also require licensees to comply with the international guidelines for limiting exposure to electromagnetic fields for the protection of the general public. It also requires licensees to keep records demonstrating their compliance. Ofcom undertakes measurements to confirm that mobile base stations, including 5G mobile base stations, do not exceed the limits set out in the international guidelines. These published measurements have consistently shown that EMF levels are well within the general public EMF limits. Further information on these measurements can be found at:
https://www.ofcom.org.uk/manage-your-licence/emf

Furthermore, the World Health Organization has stated that, to date, and after much research performed, no adverse health effect has been causally linked with exposure to wireless technologies. Further information can be found at:
https://www.who.int/news-room/questions-and-answers/item/radiation-5g-mobile-networks-and-health