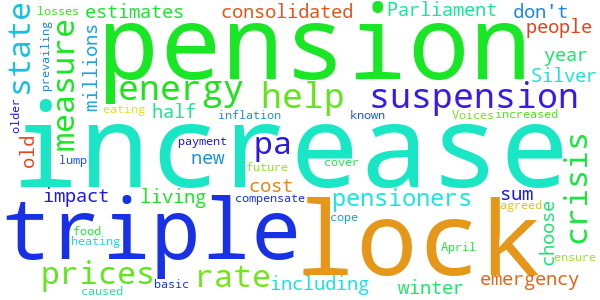 Both old and new state pensions to be increased by £500 pa as an emergency measure to compensate for the suspension of the triple lock and to help pensioners cope with the cost-of-living crisis, including increases in energy and food prices. The payment to be consolidated into future pension rates.

The suspension of the triple lock was agreed by Parliament before the full impact of the energy crisis on prices was known. Silver Voices estimates that the 3.1% increase in pensions due in April will be about half the prevailing rate of inflation then. A lump sum increase of £500 pa would cover the losses to pensioners caused by the triple lock suspension and help ensure millions of older people don't have to choose between eating and heating this winter.

The Government responded to this petition on Monday 7th February 2022

The Government wants all pensioners to have a secure income in retirement. From April, the full yearly amount of the basic State Pension will be over £2,300 higher than in 2010.

The Government has no plans to increase the State Pension by £500 a year as an emergency measure. We have never paid our pensioners more. This year, we will spend over £129 billion on the State Pension and benefits for pensioners in Great Britain. From April, the full yearly amount of the basic State Pension will be around £720 more in 2022/23 than if it had been up-rated by prices since 2010. That’s a rise of over £2,300 in cash terms.

The suspension of the Triple Lock for one year is a temporary response to exceptional circumstances caused by the pandemic. This approach is fair to both pensioners and younger taxpayers. The Government remains committed to the Triple Lock for the remainder of this Parliament.

Pension Credit can provide further benefits and we want to ensure people receive all the support they are entitled to. Around 1.4 million eligible pensioners across Great Britain already receive some £5 billion in Pension Credit, which tops up their retirement income and is a passport to other financial help such as support with housing costs, council tax, heating bills and a free TV licence for those over 75.

The Government is committed to tackling fuel poverty and protecting low income and vulnerable households. Latest figures show 200,000 fewer pensioners in absolute poverty, both before and after housing costs, compared to 2009/10.

The Winter Fuel Payment provides pensioners with support for their energy bills over winter worth £2 billion every year – £200 for households with someone who has reached State Pension age and is under age 80; or £300 for households with someone aged 80 and over. Cold Weather Payments give further help to vulnerable people in receipt of certain income-related benefits, including Pension Credit, to meet additional heating costs during periods of unseasonably cold weather between 1st November and 31st March.

In addition to the provisions announced by the Chancellor on 3 February 2022 (the Chancellor’s Statement is available here), the Warm Home Discount Scheme provides short-term support with energy bills through rebates, helping households stay warm and healthy in winter. The scheme provides those on Pension Credit Guarantee Credit with a rebate off their winter energy bill providing their supplier is part of the scheme.

We have already consulted on expanding the Warm Homes Discount by almost a third from 2.2 million to 3 million vulnerable households and increasing the rebate value to £150 from £140 each year, increasing the cost from £350 million to £475 million. We also consulted on expanding the eligibility to include all means-tested benefit recipients, bringing in those in receipt of Working Tax Credits and Pension Credit Savings Credit, and making the issue of the rebate more automatic for those on working age benefits who are living in the least energy efficient homes. BEIS have not yet published their consultation response but do plan to proceed on this basis from 2022/23.

In addition, almost £34 million worth of support was provided in 2020/21 to those most at risk of fuel poverty through Industry Initiatives like debt relief, energy advice and energy efficiency improvements. A £500 million pound Household Support Fund was introduced last November to assist vulnerable households across the country this winter. In England, the £421 million fund has provided targeted support through local authorities to help with the cost of food, utilities and wider essentials. The Devolved Authorities are receiving the remaining £79 million through the Barnett Formula to set up their own schemes.

Department for Work and Pension