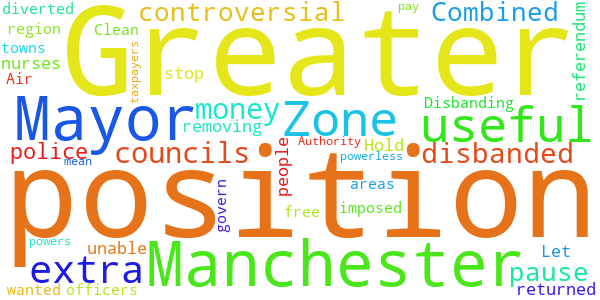 The Mayor of the Greater Manchester Combined Authority is unable to pause or stop the controversial Clean Air Zone in the region. Since the position is powerless, it should be disbanded, with powers returned to the 10 councils of Greater Manchester to govern themselves.

Disbanding the position would mean taxpayers’ money could be diverted to more useful areas to pay for extra police officers and/or nurses. The position was never wanted by the people of Greater Manchester, it was imposed upon us. Let the 10 towns be free from this position.

The Government responded to this petition on Tuesday 5th July 2022

Removing the Mayor of Greater Manchester would cost taxpayers significantly. Local leadership is key to levelling up and we are negotiating new devolution deals – not removing those already in place.

The government does not agree that a referendum on the position of Mayor is in the interests of the people of Greater Manchester. Removing the Mayor would result in the abolition of the Greater Manchester Combined Authority and incur significant costs to the taxpayer.

Local leadership is also critical to levelling up. That is why government is setting itself a mission that, by 2030, every part of England that wants a devolution deal will have one, with powers at or approaching the highest level of devolution, with a simplified, long-term funding settlement.

To help achieve this mission, for the first time Government has published in the Levelling Up White Paper a devolution framework which sets out a clear menu of options for places in England that wish to unlock the benefits of devolution. This builds on powers successfully transferred from Westminster to locally accountable bodies through earlier devolution deals such as the one for Greater Manchester, including powers over transport, adult education and housing.

These earlier devolution deals have unlocked tangible benefits for local communities. In the 2012 City Deal, for example, Greater Manchester and Government developed the ground-breaking Earn Back model, which has supported c.£3bn investment in the city region’s transport system over the last decade, including the A6-Manchester Airport Relief Road and the Trafford Park Metrolink line. The success of this model was recognised by the National Infrastructure Commission in its 2018 National Infrastructure Assessment.

We recognise, however, that new mechanisms are needed to strengthen local accountability and our Levelling Up White Paper identifies accountability as one of the four principles of the devolution framework. In pursuit of this principle, we have committed to a new accountability framework for all areas with devolved powers, to be agreed before any new devolution deals are agreed.

We are also establishing a new independent body in England focused on data, transparency and robust evidence. This will enhance the UK Government’s understanding of place-based leadership, quality of local service delivery and organisational efficacy. It will also empower citizens with information about their local area, and make it easier for them to engage with local proposals, input into service design and build pride in their place.

We are in the process of introducing legislation to Parliament to underpin in statute these changes fundamental to levelling up, alongside wider planning measures.

Department of Levelling Up, Housing and Communities

This is a revised response. The Petitions Committee requested a response which more directly addressed the request of the petition. You can find the original response towards the bottom of the petition page (https://petition.parliament.uk/petitions/606899)