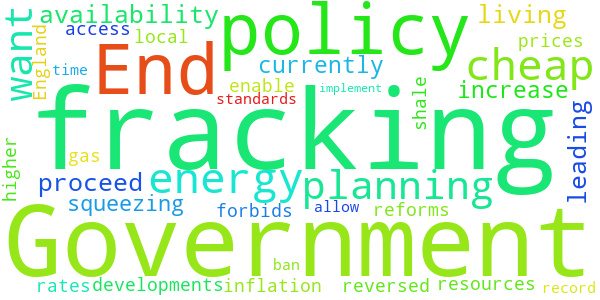 End the ban on fracking

End the ban on fracking

We want the Government to allow fracking to proceed in England, and implement planning reforms to enable shale gas developments.

Fracking could increase availability of cheap local energy at a time of record prices squeezing living standards and leading to inflation and higher interest rates.

The Government responded to this petition on Tuesday 14th June 2022

The Government does not agree we should lift the pause on hydraulic fracturing at this time given the lack of new, compelling evidence that shale gas extraction can be done safely.

In response to Putin’s barbaric acts in Ukraine and against the Ukrainian people, it is important that we keep all energy options open. While shale gas could play a part in the UK’s future energy mix, the government has always been clear that its development must be safe.

The current pause on hydraulic fracturing for shale gas was implemented in November 2019 on the basis of the difficulty in predicting and managing seismic activity caused by the process.

This followed hydraulic fracturing activities conducted in Lancashire that caused tremors that were widely felt by residents in surrounding areas, in some cases causing minor property damage.

Following this event, analysis conducted by the expert regulator, the North Sea Transition Authority (formerly called the Oil and Gas Authority), concluded that further analysis would be needed to confirm whether hydraulic fracturing could be done safely.

Specifically, the NSTA would need to see improvements in:

- the prediction of whether a site will be seismogenic;

- the prediction of the likelihood, magnitude, sequencing and timing of seismic events that could be triggered by hydraulic fracturing operations at a site; and

- the ability to predict faults and their seismogenic susceptibility from, for example, seismic surveys.

This is needed so that more effective precautionary and mitigation measures can be considered in future hydraulic fracturing plans.

For shale gas to become a significant contributor to the UK's energy supply, a significant number of wells would need to be drilled. This is because shale gas is very different to the UK’s typical offshore gas production, where a small number of wells can be sufficient to drain the gas from an entire field. Shale gas extraction instead relies on a continued series of new wells, each of which produces gas for a relatively short time.

It remains government policy to minimise disruption and damage to those living and working nearby to shale gas exploration sites. Given the lack of new, compelling evidence confirming that hydraulic fracturing can be done safely, the Government does not feel it is appropriate to lift the pause on hydraulic fracturing at this time.

This is a revised response. The Petitions Committee requested a response which more directly addressed the request of the petition. You can find the original response towards the bottom of the petition page (https://petition.parliament.uk/petitions/608745)