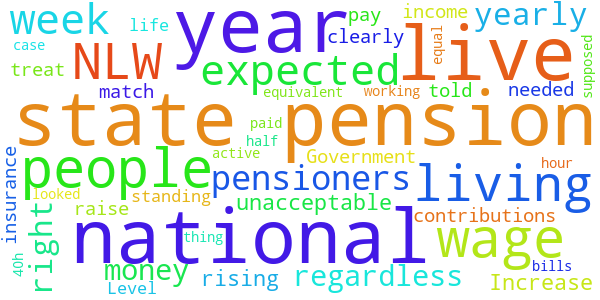 The Government should raise the state pension to match the yearly equivalent of the national living wage (NLW). The NLW is rising to £9.50 an hour (i.e. £19,760 a year for F/T 40h per week), which we are told is needed to live, yet pensioners are expected to live on a state pension of £7,376 a year.

The state pension is not enough to live on. All people regardless of standing are supposed to be looked on as equal, this is clearly not the case.
Most people have paid into the state pension through national insurance contributions during their working life.
Most pensioners live active lives and have to pay the same bills as others have to find money for but are expected to do it on less than half the income of those on the national living wage, this is unacceptable.
Level up and treat everyone the same, this is the right thing to do.

The Government responded to this petition on Thursday 14th April 2022

The Government has no plans to match State Pension and the NLW, which serve different purposes. We have never paid our pensioners more, spending over £134 billion on pensioner benefits this year.

The Government disagrees with the proposed approach of this petition. This petition suggests linking the State Pension and the National Living Wage (NLW). The two have different purposes, and a direct comparison cannot be drawn. The NLW aims to protect low income workers and provide an incentive to work by ensuring that workers benefit from being employed. Most pensioners have left the labour market.

Comparisons made in this petition between headline State Pension payments and the NLW do not consider the full package of measures available to support people in retirement. In addition to the headline State Pension amounts, there are many further sources of financial support for pensioners. Those aged over State Pension age are entitled to free eye tests, free NHS prescriptions and free bus passes. Those aged over 75 and in receipt of Pension Credit are eligible for free TV licences. In addition, Winter Fuel Payments provide pensioners with support for their energy bills worth over £2 billion every winter.

In 2016, the Government introduced the new State Pension to provide a simple and sustainable foundation for private saving, as well as addressing some historic inequalities in the State Pension system. The new State Pension provides better outcomes on average for low earners, the self-employed and many women. The full yearly rate of the new State Pension is now over £9,650 per year. Automatic enrolment into workplace pensions was introduced to encourage more people to save for their retirement, meaning more than 10 million employees have now been automatically enrolled into a workplace pension. In addition to direct State Pension payments, savers benefit from the Government’s support of tax relief for work-based pension contributions, worth over £50 billion per year.

This year, the Government will spend over £134 billion on the State Pension and benefits for pensioners in Great Britain. Based on the most recent data from August-2021, yearly average amounts of State Pension in payment are £ 8,302 per individual. Since 2010, the full yearly amount of the basic State Pension has risen by over £2,300, in cash terms and £720 more than if it had been uprated by inflation.