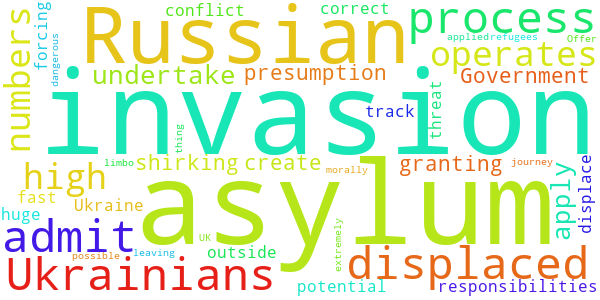 The Government should create a process to admit any Ukrainians displaced due to the Russian invasion, which operates under the presumption of granting asylum and can be applied for outside the UK.

The threat from the Russian invasion of Ukraine is extremely high and has the potential to displace huge numbers. The morally correct thing is to admit as many refugees from this conflict as possible without leaving them in limbo, shirking our responsibilities or forcing them to undertake a dangerous journey to apply.

The Government responded to this petition on Tuesday 12th April 2022

We delivered a generous response for Ukrainians, with 3 schemes to help them come to the UK, the first of their kind in the world. They offer greater security than asylum, and have no cap on numbers.

Our humanitarian response has been developed at pace and in close consultation with the government of Ukraine and following extensive discussion with other countries in the region. The Ukrainian Family Scheme was launched on 4 March for relatives of British nationals and people settled in the UK. The scheme includes immediate family members (spouses, civil partners, partners, children under 18 and parents of children under 18), foster children, Ukrainian parents, grandparents, grandchildren, adult children, siblings, aunts, uncles, cousins, nieces, nephews, in-laws and their immediate family members. This was the first scheme of its kind to be operationalised by any country in the world.

We have streamlined the process so that there are no requirements for salary or language tests, but people will need to pass security checks. These checks are a fundamental part of our visa approval process and will continue, as they did for the evacuation of Afghanistan, to keep the public safe. Those granted status under the scheme will be able to come to the UK for three years with a right to work and access to benefits.

In addition to the Ukrainian Family Scheme, we also want to help Ukrainians who do not have family here. To assist them, we launched the Homes for Ukraine Scheme on 18 March. It will match Ukrainians with no family here with individuals, businesses, community organisations, or local authorities who are willing and able to act as their sponsor.

The Government is working closely with the UN Refugee Agency and other organisations in Ukraine to ensure that displaced Ukrainians are aware of this offer and know how to apply. DLUHC will also work closely with the devolved administrations in Scotland, Wales, and Northern Ireland to promote this scheme.

There are no limits to the number of individuals who can come to the UK via either of these schemes, provided they are eligible.

The Government has no plans to set up a separate fast track process or route outside of these two schemes, and the rights granted for work, benefits and right of abode for anyone claiming asylum are significantly inferior to those offered via UFS or H4DS.

Speeding up the process

Individuals who hold a valid Ukrainian international passport; or an expired Ukrainian international passport that contains an official passport extension stamp endorsed by the Ukrainian government, do not need to provide their biometric information at a visa application Centre (VAC) overseas when making an application under both Ukraine Schemes. These individuals can apply entirely online, and will instead submit their biometrics after they have arrived in the UK.

Individuals who hold identity cards or Ukrainian domestic passports and do not have a valid Ukrainian international passport (or an expired passport with a Ukrainian government officially endorsed extension), will still be required to provide their biometric information at a VAC in person.

We have also surged staff to support operations in VACs overseas, and prioritised caseworking for the Ukraine schemes in the UK, including by redeploying staff from wider Home Office business and other government departments.