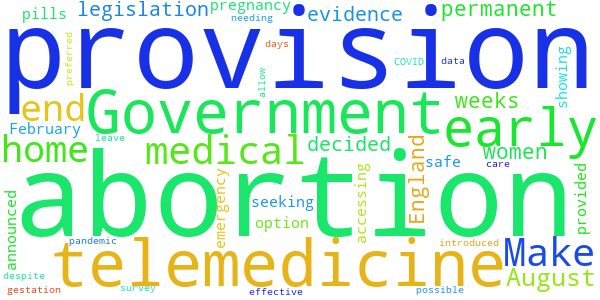 Make provisions for telemedicine for early abortions permanent in England

Make provisions for telemedicine for early abortions permanent in England

The Government should make provisions that allow women to take both pills for early medical abortion up to 9 weeks and 6 days gestation at home permanent. The Government has announced that provisions for telemedicine will end in August.

Telemedicine for abortion in England has provided those seeking a medical abortion in the first 10 weeks of pregnancy the option of accessing care without needing to leave their homes. This was made possible by emergency legislation introduced during the COVID-19 pandemic. On 24 February 2022 the government decided to end this provision from August 2022, despite evidence and survey data showing that telemedicine for early medical abortion is safe, effective and preferred by women.

The Government responded to this petition on Tuesday 12th April 2022

On 30 March 2022, Parliament voted in favour of making home use for early medical abortion permanent. Further detail on the measure permanently coming into force will be set out in due course.

At the beginning of the COVID-19 pandemic in March 2020, the Government put in place a temporary approval in England, enabling women to take both pills for early medical abortion up to 9 weeks and 6 days gestation in their own homes. A consultation must have first taken place with a clinician, but women did not need to physically attend a hospital or clinic. Prior to the pandemic, only the second pill for early medical abortion could be taken at home and women were required to attend a clinic to take the first pill.

This temporary measure was put in place at the start of a public health emergency to address a specific and acute medical need, reducing the risk of transmission of COVID-19 and ensuring continued access to abortion services. Without this measure, significant numbers of women would not have been able to access an abortion. At the time a decision was made to time limit the approval for two years, or until the pandemic was over, whichever was earliest.

From 26 November 2020 to 26 February 2021, the Government ran a public consultation seeking views on the risks and benefits of making the COVID-19 measure allowing for home use of both pills for early medical abortion permanent. The consultation closed with a total of 18,834 responses and the Government has published a full summary of consultation responses, which includes key themes and issues of concern: https://www.gov.uk/government/consultations/home-use-of-both-pills-for-early-medical-abortion/outcome/home-use-of-both-pills-for-early-medical-abortion-ema-up-to-10-weeks-gestation-summary-of-consultation-responses.

Due to the success and impact of the national vaccination and booster programme and having considered the responses submitted to the public consultation on whether to make the measure permanent, as well as wider available evidence, the Government’s view was that the provision of early medical abortion should return to pre-COVID arrangements. Therefore, on 24 February 2022 the Government announced that the temporary approval for early medical abortion would be extended until midnight on 29 August 2022 and after this the arrangement would end and face to face services with the first pill being taken in the hospital or clinic, would return: https://www.gov.uk/government/news/england-to-return-to-pre-pandemic-system-for-early-abortions.

Following this announcement, an amendment to the Health and Care Bill sought to make the temporary approval permanent. Following debate on the amendment and a free vote in both the House of Lords and the House of Commons, on 30 March 2022 Parliament voted in favour of making home use for early medical abortion permanent.

Further detail on the measure permanently coming into force will be set out in due course.

Ensuring women can access health services in a safe, secure way remains our priority and the Government will work closely with abortion providers and other stakeholders on the provision of services.