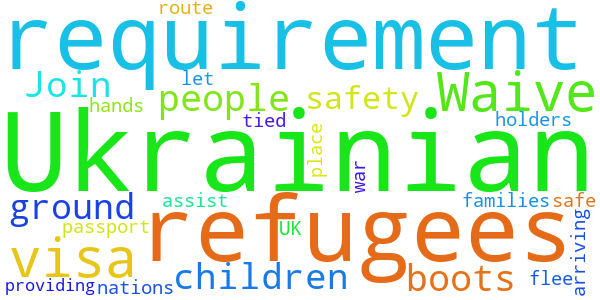 Join other nations in providing a route to safety for refugees. Waive all visa requirements for Ukrainian passport holders arriving in the UK.

They are war refugees, our hands are tied to assist with boots on the ground, let us give the people of Ukraine a safe place for their families and children to flee to.

The Government responded to this petition on Wednesday 6th April 2022

Visas provide clarity and stability to an individual having moved from another country following horrific events. They also act to prevent incidents of adult and child human trafficking.

Biometric checks are an essential part of our visa application process. There are those who seek to take advantage of the UK, and we will not let them use the Government’s humanitarian schemes for Ukrainians fleeing the Russian invasion to do so.

We are aware of cases where individuals that could pose a national security threat have attempted to enter the UK during crisis situations, and biometric checks have enabled us to identify these individuals as potential threats.

However, in order to make our Schemes as straightforward to use as possible, and based on the latest security advice, on 15 March we made changes to allow Ukrainians with valid passports who are eligible for this route to do their application online. They will no longer need to go to a Visa Application Centre to give their biometrics before they come to the UK, instead giving them after they have entered the UK.

Visa applications give the UK the chance to assess the applicant’s circumstances, such as where they come from, why they want to come to the UK, how long they want to stay for, and their personal situation and skills.

From the UK’s perspective, this about security concerns. Given the malign action being taken by the Russian state to infiltrate Ukraine, these checks are a fundamental part of our visa approval process and will continue, as they did for the evacuation of Afghanistan, to keep the UK safe. There are those who seek to take advantage of the UK.

As the Home Secretary has said: “Russian troops are seeking to infiltrate and merge with Ukrainian forces. Extremists are on the ground and in the region, too. Given this, and also with Putin’s willingness to do violence on British soil, and in keeping with our approach, which we retained consistently throughout all emergency evacuations, including that of Afghanistan, we cannot suspend any security or biometric checks on people we welcome to our country. We have a collective duty to keep the British people safe and this approach is based on the strongest security advice.”

The Government has a duty to protect the security of the UK and the safety of its citizens. It would be wrong to make a blanket offer of sanctuary to those who may have committed offences that would be crimes in the UK or pose a threat to national security. We are constantly reviewing these processes to ensure they can be streamlined where possible, to ensure that all checks are conducted as quickly as possible whilst maintaining the necessary level of checks are completed.

For the individual, a visa can help provide them with a better understanding on what they can do in the UK in terms of employment and how long they can stay for.

The Windrush Lessons Learned Review underlined the importance of providing individuals with clear evidence of their immigration status - lots of people were not adequately documented and this caused problems for both them and their dependents later down the line.

This petition was debated in Parliament on Monday 14th March 2022