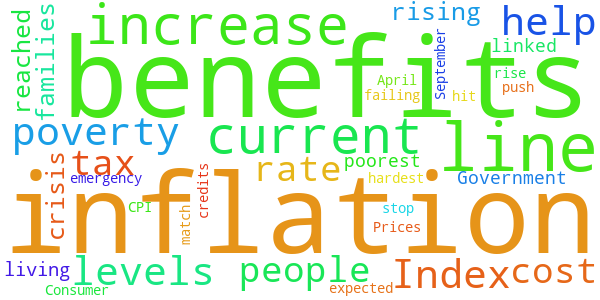 Increase benefits in line with current levels of inflation

Increase benefits in line with current levels of inflation

The Government must increase benefits in line with current levels of inflation (at least 6.2), to help stop the cost of living crisis becoming a poverty emergency.

Inflation-linked benefits and tax credits will rise by 3.1% from April 2022, in
line with the Consumer Prices Index (CPI) rate of inflation in September 2021.

However, inflation has now reached 6.2% and are expected to keep rising. This will hit the poorest families hardest and failing to increase benefits to match will push more people into poverty.

The Government responded to this petition on Monday 6th June 2022

We are providing over £15bn of support for those with the greatest need. This is in addition to the £22bn announced previously, with support for the cost of living totalling over £37bn this year.

The Government disagrees with this petition.

The Secretary of State for Work and Pensions is required by law to undertake an annual review of benefits and pensions. The Consumer Prices Index (CPI) in the year to September is the latest figure that she can use to allow sufficient time for the required operational changes before new rates can be introduced at the start of the new financial year. Benefit up-rating since April 1987 has been based on the increase in the relevant price inflation index in the year to the previous September. Over the past 35 years, there have been a number of occasions where uprating decisions were implemented at a higher rate than the prevailing inflation when they come into force as the index balances over time. For example, in 2012 benefits were increased by 5.2% whereas by the following April CPI was 3% and in 2020 the increase was 1.7% while CPI fell to 0.8% by April. Forecasts currently project inflation to be falling by Spring 2023.

The Secretary of State’s decisions regarding benefits and pensions for 2022/23 were announced to Parliament on 25 November 2021 and the increase of 3.1% from April 2022 was debated and approved by both Houses of Parliament earlier this year. In 2022/23, welfare expenditure in Great Britain is forecast to be around £243bn.

The Chancellor announced further, immediate help with the cost of living on 26 May. The Government is aware that millions of households across the UK are struggling to make their incomes stretch to cover the rising cost of living. That is why the Government is providing over £15bn in further support, particularly targeted at those with the greatest need. This package is in addition to the over £22bn announced previously, with Government support for the cost of living now totalling over £37bn this year. This means that almost all the 8 million most vulnerable households will get £1,200 this year, in one-off support to help with the cost of living, with all domestic electricity customers receiving at least £400.

Measures in the Chancellor’s announcement include;

• £650 one-off Cost of Living Payment for those on means tested benefits;

• £300 one-off increase to the winter fuel payment so pensioner households will receive either £500 or £600, depending on the age of those living in the household;

• £150 one-off Disability Cost of Living Payment for those on disability benefits such as Disability Living Allowance and Personal Independence Payment.

• An additional £500 million of local support, from October 2022, to be administered by Local Authorities and the Devolved Administrations to help those in most need with payments towards the rising cost of food, energy, and water bills. This brings the total amount of additional support to £1.5bn since October 2021.

Department for Work and Pensions
·