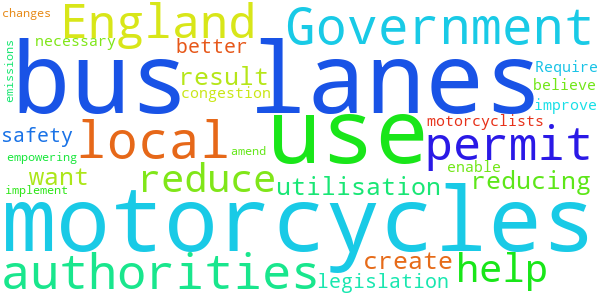 We believe this would result in the better utilisation of bus lanes, improve safety for motorcyclists and help reduce emissions by reducing congestion.

The Government responded to this petition on Thursday 30th June 2022

The Department already prescribes traffic signs that enable local authorities to allow motorcycles to use bus lanes during their hours of operation. Whether to do so is a decision for them.

The Department recognises that motorcycling has become increasingly popular, but it should be acknowledged however that not all bus lanes are suitable for motorcycle access. It is entirely a matter for each traffic authority to decide if this appropriate.

In doing so, they have to bear in mind the needs of other road users. In the national bus strategy Bus Back Better, the Government set out its strategy for improving bus services, which includes an expectation on authorities to provide more and better bus priority, including bus lanes. ‘Gear Change: A bold vision for cycling and walking’ is clear that providing more and better cycling facilities, including joint bus and cycle corridors, is key to delivering the ambition for 50% of short urban journeys to be walked or cycled. The focus on improving active travel and public transport will help deliver many benefits, including contributing to better public health, decarbonisation of transport, reduced congestion and better air quality.

To help local authorities, the Department has published the Traffic Advisory Leaflet (TAL) 2/07: ‘The use of bus lanes by motorcycles’. Guidance on signing is also provided in Chapter 3 of the Traffic Signs Manual, available at www.gov.uk/government/publications/traffic-signs-manual

Anyone that would like to request motorcycle use in bus lanes in England should approach their local traffic authority. TAL 2/07 can be viewed at: www.gov.uk/government/publications/traffic-advisory-leaflets-1989-to-2009.

All traffic signs and road markings placed on a public highway must be either prescribed in the Traffic Signs Regulations and General Directions 2016, as amended, (TSRGD) or authorised by the Secretary of State. Since 2011, TSRGD has prescribed signs that permit motorcycle users to use bus lanes. TSRGD can be viewed at: www.legislation.gov.uk/uksi/2016/362/contents/made.

Traffic authorities have a statutory responsibility to provide traffic management schemes for their roads (under section 122 of the Road Traffic Regulation Act 1984) therefore they are free to make their own decisions about the streets under their care, provided they take account of the relevant legislation. It is entirely a matter for individual authorities to decide on the nature and scope of policies and to balance the needs of residents, emergency services, local businesses and those who work in and visit the areas.