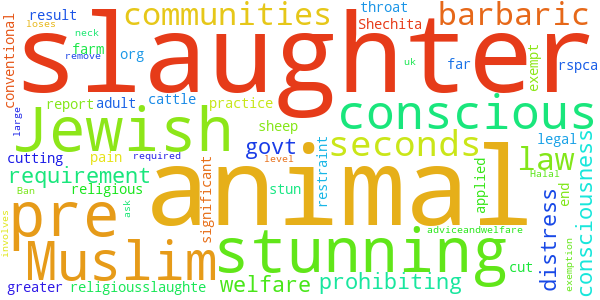 Ban the religious slaughter of animals without first stunning them

Ban the religious slaughter of animals without first stunning them

Muslim & Jewish communities are exempt from the legal requirement to stun animals before slaughter. All Shechita (Jewish) & 42% of Halal (Muslim) slaughter involves cutting an animal's throat without stunning it

"The level of restraint of conscious animals required for slaughter without pre-stunning was far greater than for conventional slaughter.

A large cut made across the neck of a conscious animal would "result in very significant pain and distress" before the animal loses consciousness (around 5 to 7 seconds for sheep, 22 to 40 seconds for adult cattle)"

The Government responded to this petition on Wednesday 26th October 2022

The Government would prefer all animals to be stunned before slaughter. However, we respect the rights of Jews and Muslims to eat meat prepared in accordance with their religious beliefs.

The Government encourages the highest standards of animal welfare at slaughter and would prefer all animals to be stunned before slaughter. However, we are committed to upholding the rights of Jews and Muslims to eat meat prepared in accordance with their religious beliefs.

Legislation sets out the main requirements to protect the welfare of animals at slaughter. There are additional rules that apply when animals are slaughtered without stunning to ensure that animals are spared avoidable pain, suffering, or distress during the slaughter process. Official Veterinarians of the Food Standards Agency (FSA) are present in all approved slaughterhouses to monitor and enforce these animal welfare requirements.

A significant proportion of halal meat comes from animals that are stunned before slaughter, and the 2022 FSA Slaughter Sector Survey shows that this is around 85% in the case of white meat and 69% in the case of red meat in England and Wales. The ‘Demonstration of Life Protocol’, an industry-led initiative supported by the Government, provides assurance for Muslim consumers that stunning is compatible with halal slaughter requirements, while protecting the welfare of the animals involved.