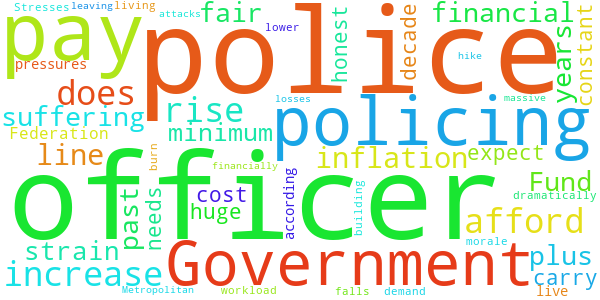 Fund pay rise for police officers in line with inflation, plus 1%

Fund pay rise for police officers in line with inflation, plus 1%

The Government should fund a pay rise for police officers in line with inflation plus 1% for a minimum of 5 years. Police officer pay needs a huge hike as it has dramatically falls 20% behind the cost of living over the past decade, according to the Metropolitan Police Federation.

The morale of many officers is lower than ever, as pressures and burn out increase. As the demand for officers increases, so does the workload. Too many officers are suffering financially. How does this Government expect police officers to carry out fair and honest policing while they are suffering financial strain and massive losses due to the constant attacks on policing and police pay? Stresses are building up and many police officers are leaving policing because they can’t afford it, and can’t afford to live.

The Government responded to this petition on Tuesday 11th October 2022

It would not be appropriate for the Government to make pay awards for police officers without meeting its legal duty to consider the recommendations of the independent Police Remuneration Review Body.

The Government is unequivocal in its support for the police and giving them the resources that they need to protect the public, investing up to £16.9 billion in 2022/23 and committing to recruit an additional 20,000 officers by March 2023.

It is the role of the Police Remuneration Review Body (PRRB) to consider and make recommendations to the Government on the appropriate level of pay and allowances for police officers in England and Wales.

The PRRB gathers and invites parties to submit evidence to inform its decisions. This includes both written and oral evidence from the Government, police employers and police staff associations. It weighs the evidence, considers independent research, and formulates detailed recommendations. In reaching its recommendations, the Review Body must have regard to a number of considerations set out in its terms of reference, including the need to recruit, retain and motivate suitably able and qualified officers; affordability; and the Government’s wider public sector pay policy. The Government values the independent and expert advice of the PRRB and gives very careful consideration to its recommendations. Its role is set out in statute and it would not be appropriate to make pay awards without considering its advice.

On 19 July, the Government announced that it had accepted in full the PRRB’s recommendation to award a consolidated increase of £1,900 to all police officer ranks and pay points with effect from 1 September 2022. The award is targeted at those on the lowest pay points to provide an uplift of up to 8.8%. To support this, the Home Office will, from within its existing budgets, provide forces with additional funding for pay over the Spending Review period of at least £70 million in 2022/23, £140 million in 2023/24 and £140 million in 2024/25.

The Government understands that people across the UK are worried about the rising cost of living and are seeing their disposable incomes decrease as they spend more on the essentials.

In May, we announced over £15 billion of additional cost of living support, targeted at those with the greatest need. As a result, millions of vulnerable households will receive at least £1,200 of support this financial year, with the vast majority of households receiving at least £550. This package builds on the over £22 billion previously announced, meaning Government support for the cost of living now totals over £37 billion this year, equivalent to 1.5% of GDP.

This support includes helping all domestic electricity customers in Great Britain cope with the impact of higher energy bills, with £400 off their bills from October through the expansion of the Energy Bills Support Scheme.

In addition to annual pay awards, police officers who have not reached the top of their pay scale receive annual incremental pay of at least 2%, and often 4-6%, subject to satisfactory performance. In its 2021 report, the PRRB stated that median total earnings for a full-time police constable outside London are £41,300. Voluntary resignation rates, at 2%, remain low compared to other workforces.

We are determined to ensure the nation does more to honour the service and sacrifice of the police. That is why we introduced the Police Covenant, recognising the bravery and commitment of current and former members of the police workforce and ensuring they get the support and protection they need. We have identified three areas of focus for the Covenant: health and wellbeing, support for families and physical protection. Though the work of the Covenant will be ongoing, it has already helped deliver pre-deployment mental health training for new recruits and improved occupational health standards for officers in service.

This is a revised response. The Petitions Committee requested a response which more directly addressed the request of the petition. You can find the original response towards the bottom of the petition page (https://petition.parliament.uk/petitions/614869)