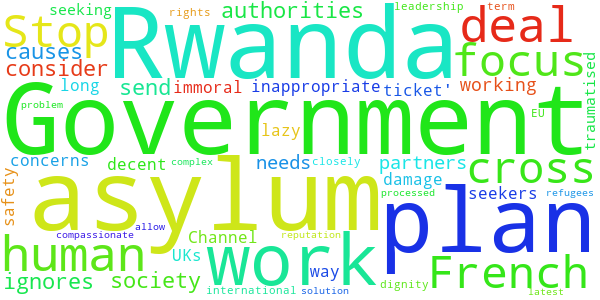 The Government's latest plan is immoral and ignores serious human rights concerns about Rwanda. The Government needs to show leadership and work more closely with the French authorities and the EU to allow traumatised refugees to be processed with safety and dignity before they cross the Channel.

This is a lazy and inappropriate solution to a complex problem and the Government should focus more on working with international partners to deal with the causes of asylum seeking. The Government should consider the long term damage this could do to the UKs reputation as a decent and compassionate society.

The Government responded to this petition on Monday 27th June 2022

The Government is committed to tackling illegal migration and breaking the business model of evil people smuggling gangs. Rwanda is safe and secure, with a track record of supporting asylum seekers.

The UK is a generous and welcoming country. There are numerous safe and legal ways for those who wish to come and live in the UK, and the Government is committed to continuing to offer safe and legal routes for refugees from across the world.

However, there is a global migration crisis. An estimated 100 million people are displaced and the current global approach to asylum and migration is broken.
The UK’s capacity to help those in need is severely compromised by those who come here illegally and who seek to jump the queue by paying people smugglers.

We continue to work closely with France, a safe country, on the shared challenge of illegal migration in the Channel and they agreed on the need to cooperate to stop people smugglers. The French and other near borders partners share our aim in preventing these dangerous and unnecessary crossings. This is a global phenomenon, and its resolution is not within the exclusive gift of any one country or administration.

The Government is clear that new and innovative solutions are required in order to tackle this problem. On 14 April, the Prime Minister announced the Migration and Economic Development Partnership between the UK and Rwanda to address the shared international challenge of illegal migration and break the business model of people smuggling gangs. Those making dangerous, unnecessary and illegal journeys to the UK may now be relocated to Rwanda, who will take responsibility for processing their claims and supporting them. The gangs use their profits for further illegal activity, including people and drug trafficking, and slavery.

All those considered for relocation will be screened and have access to legal advice. Decisions will be taken on a case-by-case basis, and nobody will be relocated if it is unsafe or inappropriate for them. Individuals will have all their needs looked after while their asylum claims are being considered in Rwanda. This includes safe and clean accommodation, food, healthcare and amenities. People are free to leave if they wish and they will not be detained; but those in genuine need of international protection will be provided with it in Rwanda.

For those whose claims are accepted in Rwanda, they will then be supported to build a new and prosperous life in one of the fastest growing economies, recognised globally for its record on welcoming and integrating migrants. They will be offered a comprehensive integration package lasting up to five years to help put down roots and start a new life there. For those individuals who are unsuccessful, they could still be allowed to stay in Rwanda if they wish, helped to return to their home country or be removed to another safe country.

This new and innovative arrangement with Rwanda fully complies with all national and international law, including the UN Refugee Convention and European Convention on Human Rights. Rwanda is a State Party to the 1951 UN Refugee Convention and the seven core UN Human Rights Conventions. The Government’s own assessment of Rwanda and their asylum process has found it is a fundamentally safe and secure country with a track record of supporting asylum seekers, including working with the UN Refugee Agency which confirmed the country has a safe and protective environment for refugees. Our Country Policy Information Note, published on 9 May on GOV.UK, provides further information on the basis by which we have determined that Rwanda is a safe place for refugees.

The Government is clear that decisive action must be taken to stop the abuse of our asylum system and tackle the scourge of the criminal gangs who play on the hopes of migrants by facilitating dangerous journeys including Channel crossings in small boats. This has devastating consequences for the countless men, women, and children who have tragically lost their lives or lost loved ones on these perilous journeys. The existence of these parallel routes is also deeply unfair as it advantages those with the means to pay people smugglers over vulnerable people who cannot. By reforming the asylum system and taking bold, international action to address the global migration crisis, we can ensure we can keep providing support and protection for those who need it, especially those most vulnerable, through proper safe and legal routes while tackling the criminality of the people smuggling networks.