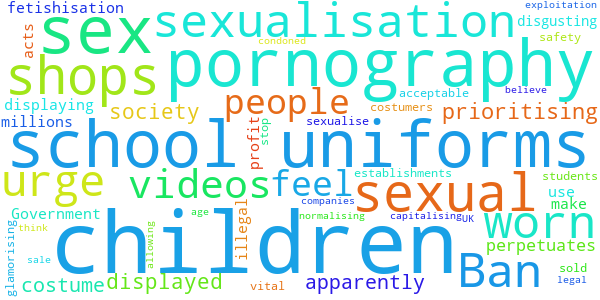 We urge the Government to make it illegal for school uniforms to be displayed and sold within sex shops to stop the sexualisation of children. We also think it is vital for pornography to ban displaying videos where school uniforms are worn as a costume.

It is disgusting that the sexualisation and fetishisation of children is apparently condoned by these establishments and companies. In the UK school uniforms are worn by most students until the age of 16.

We believe their sale in sex shops and use as costumers in pornography is glamorising and normalising sexual acts with children. This is capitalising off of the sexual exploitation of children and prioritising profit over the safety of millions of children. By allowing this to be legal it perpetuates a society in which people feel it is acceptable to sexualise children.

The Government responded to this petition on Monday 1st August 2022

The Government does not intend to take this specific action at this time but remains firmly committed to preventing the sexualisation of children through the robust measures that are already in place.

The Government is committed to keeping children safe from all forms of abuse and already has a range of robust offences to protect children from sexual exploitation and exposure to harmful material.

The Government encourages corporate responsibility from both manufacturers and retailers with regard to sexualised merchandise. Local Authorities ultimately have responsibility to ensure that the advertisement and sale of items and products do not contravene any establishments trading legislation.

Parents and consumers share concerns about the commercialisation and sexualisation of children, including the sale of novelty clothing products aimed at the adult market. We recognise that this is a highly subjective issue, intimately bound up with notions such as good and bad taste, personal preferences, and the ability to exercise choice. However, it is not for the UK Government to dictate the types of novelty clothing retailers can sell nor to comment on day-to-day commercial decisions by companies.

The British Board of Film Classification (BBFC) is a non-governmental, independent body which is designated by the Secretary of State for Culture under the Video Recordings Act 1984 as the ‘designated authority’ for video classification. It has a statutory responsibility for the regulation of pornographic content released on physical media formats in the UK.

Decisions about film classification are made by the BBFC at arm's length from the government, which is important in order to ensure impartiality and freedom from undue political influence. These classifications help the public make informed viewing choices, whilst also recognising and respecting adult freedom of choice within the law.

The BBFC's decisions are based on their Classification Guidelines, which are informed by consultations every 4-5 years with experts and over 10,000 members of the public. The Guidelines detail the relevant legal considerations that inform the BBFC's decision making on what material is legally acceptable for classification, including at its 'R18' category - primarily for explicit works of consenting sex or strong fetish material involving adults.

The strongest protections in DCMS’s Online Safety Bill are for children. The online safety framework will cover all online sites that offer pornography, including commercial pornography sites, social media, video sharing platforms, forums and search engines. These companies will have to prevent children from accessing pornography or face huge fines.

On 7 July, the Culture Secretary published a Written Ministerial Statement which sets out a proposed list of the types of content that it expects to be listed as primary priority and priority harmful content for children and priority harmful content for adults (https://questions-statements.parliament.uk/written-statements/detail/2022-07-07/hcws194). For children, pornography is among the kinds of content proposed as primary priority harms, from which children of all ages will need to be protected.

Government is continuing to engage extensively with stakeholders, parliamentarians and Ofcom ahead of designating priority harmful content in secondary legislation. We are working closely with Ofcom to ensure the implementation of the framework is as short as possible, following passage of the legislation.

The Bill also lists priority offences at Schedule 7 which reflect the most serious and prevalent illegal content and activity, against which companies must take proactive measures. This includes revenge pornography and extreme pornography. These priority offences will ensure that companies and the regulator tackle the most serious illegal content where risk of harm is greatest or children are at risk so that regulation has the most impact. Platforms will have to take steps to search for, remove and limit people’s exposure to this content and criminal behaviour. Including this list on the face of the Bill will enable Ofcom to take faster enforcement action against platforms for failing to remove this illegal content, rather than waiting for the offences to be made a priority in secondary legislation. Companies will also have to remove illegal content relating to criminal offences that do not appear on the list of priority offences, where they become aware of this content.