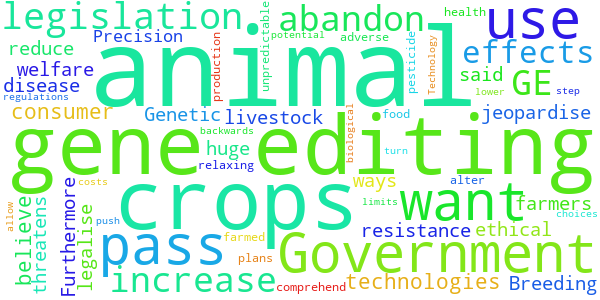 Submitted by James Bambroffe on Thursday 12th May 2022

I want the Government to abandon plans to pass legislation to legalise gene editing of animals and crops. The Government has said technologies such as gene editing have the potential to increase disease resistance in crops, reduce pesticide use, lower costs to farmers and increase food production.

I want the Government to abandon the Genetic Technology (Precision Breeding) Bill because I believe that relaxing regulations on GE livestock would be a huge step backwards for animal welfare and jeopardise ethical consumer choices.

Furthermore gene editing could have unpredictable effects and alter the animals in ways we cannot comprehend. We believe the use of GE technologies also threatens to push farmed animals further beyond their biological limits, which could have adverse effects for their health and in turn for consumers.

The Government responded to this petition on Monday 26th September 2022

The provisions in the Bill on precision bred animals will be brought into force later. The Bill includes a system to safeguard animal welfare and no changes will be made until this system is in place.

Precision breeding technologies, such as gene editing, have great potential and can help us adapt to the impacts of climate change, improve food security and enhance the sustainability and resilience of agricultural systems.

The UK is at the leading edge of genetics and genomics research, and we want UK researchers and commercial breeders to be at the forefront of capturing these benefits and helping cement our position as a science superpower.

Precision breeding describes a range of technologies, such as gene editing (GE), that enables DNA to be edited much more efficiently and precisely than current breeding techniques, which can take decades to produce the same changes. These technologies can make targeted genetic changes to produce the beneficial traits that can also occur through traditional breeding and natural processes.

The scientific advice from our independent Advisory Committee on Releases to the Environment (ACRE), the Royal Society, the Royal Society of Biology and the Roslin Institute, is that precision bred organisms pose no greater risk to the environment or health than their traditionally bred counterparts.

The Genetic Technology (Precision Breeding) Bill aims to create a new, proportionate regulatory regime for organisms produced through precision breeding technologies, where the genetic changes could have arisen through traditional breeding processes.

The primary policy objective of the Bill is to ensure that plants, animals and food and feed products developed from them, using precision breeding technologies, are regulated proportionately to risk. The Bill will introduce simpler regulatory measures to enable these products to be authorised and brought to market more easily.

• Introduce two notification systems; one for precision bred organisms used for research purposes and the other for marketing purposes. The information collected will be published on a public register.

• Establish a proportionate regulatory system for precision bred animals to ensure animal welfare is safeguarded. We will not be introducing changes to the regulations for animals until this system is in place.

We want to safeguard animal welfare and that is why we are taking a step-by-step approach by bringing into effect legislation for precision bred plants first, followed by animals.

All animals are protected by comprehensive animal health and welfare legislation, including the Animal Welfare Act 2006, which makes it an offence to either cause any captive animal any unnecessary suffering or to fail to provide for the needs of the animal. This is supplemented by detailed farmed animal welfare legislation, which includes specific requirements to protect animals when bred or kept.

The use of animals for research, including any which have been the subject of genetic technology processes, is regulated under the Animals (Scientific Procedures) Act 1986 (ASPA).

In the Bill we have ensured that before marketing precision bred animals, developers will need to provide assurances to confirm that the welfare of the animal (and its offspring) will not be adversely affected by any trait resulting from precision breeding. This will be in the form of an animal welfare declaration where an independent scientific expert committee and Defra’s Secretary of State will need to be satisfied with the declaration before authorising that a precision bred animal can be marketed.

Genetic improvement through breeding has been at the heart of livestock production since modern agriculture began. Selective breeding and, more recently, genomic selection using genetic marker data, have been transformational for livestock productivity and health. Precision breeding has a vital role to play in helping improve animal health and welfare and reduce the carbon footprint of livestock production. There are already examples of research taking place across the UK to develop resistance against some devastating diseases such as porcine reproductive and respiratory syndrome in pigs, bird flu in chickens and Infectious Pancreatic Necrosis virus in fish.

The UK has a proud history of taking action on animal welfare, and the Government fully recognises the important issues around maintaining animal welfare as part of genetic improvement through breeding. We are fully committed to maintaining our high animal welfare standards and to improving them over time as new research and evidence emerges.

We do not see this as a route to lower welfare standards and we will continue to work closely with stakeholders and experts to ensure our high standards are embedded in our approach to genetic technologies.