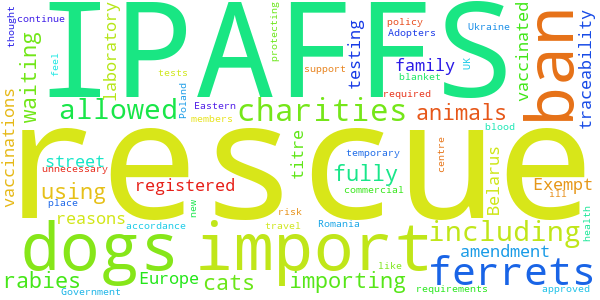 Submitted by Laura Walker on Friday 13th May 2022

There is a temporary ban on the commercial importing of cats, dogs and ferrets, including rescues, from Romania, Belarus, Poland and Ukraine, for health reasons.

We would like an amendment to that policy whereby registered charities who import using the IPAFFS system to be allowed to continue to import their rescue animals.

Dogs, cats, ferrets that are fully vaccinated in accordance with U.K. import requirements, including rabies titre testing from a UK Government-approved laboratory, and that can be registered on IPAFFS should be allowed to travel.
There is traceability back to the rescue of the vaccinations, and as required blood tests.

We fully support protecting the U.K. from a risk to rabies, but feel this blanket ban is unnecessary and ill thought out.

Adopters are waiting for their new family members and street dogs are waiting to take the place in the rescue centre.

The Government responded to this petition on Wednesday 8th June 2022

Great Britain has suspended the commercial import of dogs, cats and ferrets from Belarus, Poland, Romania or Ukraine due to the potential risk to human and animal health and cases of non-compliances.

We have taken the decision to temporarily suspend the commercial import of dogs, cats and ferrets into Great Britain if they originate from or have been dispatched from Belarus, Poland, Romania or Ukraine, until 9 July 2022.

We appreciate the impact that the temporary suspension will have on rescue organisations that operate in these countries. However, this measure is important to protect our biosecurity and the health of pets in this country. For example, Great Britain has been free of rabies since 1922. There are approximately 1,800 cases of rabies per year in Ukraine, making it high-risk. Other risks include Echinococcus multilocularis, a tapeworm that poses a serious disease risk to both humans and animals.

There is evidence to suggest that commercial consignments of pet animals from Ukraine are being moved into Poland, Romania and Belarus, including strays, rescue and abandoned animals. Unlike non-commercial pets accompanying Ukrainian refugees, these animals often have unknown history and disease status which increases the risk of disease spread.

This risk has been exacerbated further by serious cases of non-compliance (https://www.gov.uk/government/news/chief-vet-warns-rescue-charities-to-follow-documentation-requirements).

We have amongst the highest standards of biosecurity in the world. The Government takes the importation of pets seriously and is committed to preserving our high standards of biosecurity. The movement of commercial pets from Belarus, Poland, Romania and Ukraine represents a clear and serious enough biosecurity risk at the current time, that we therefore consider the suspension of these movements necessary to protect the health of people and pets in Great Britain.

There are a limited number of quarantine facilities in the UK. The restrictions we have put in place will help us prioritise those seeking refuge in the UK, and which to bring their pet.

The Government appreciates the work of genuine rescue and rehoming organisations. This is a temporary measure which will be reviewed in due course. We would encourage organisations which are temporarily unable to import rescue dogs, cats, and ferrets into Great Britain to provide help and assistance to animals in situ.