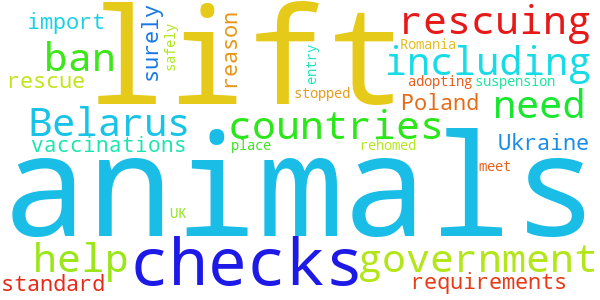 Lift ban on import of rescue animals from Romania, Ukraine, Belarus and Poland

Submitted by Emma Dancer on Friday 13th May 2022

Lift ban on import of rescue animals from Romania, Ukraine, Belarus and Poland

The Government should lift the suspension on rescuing animals from these countries if they meet the standard entry requirements including vaccinations and checks.

The government has stopped anyone from rescuing animals from these countries and adopting them here. These animals need our help and there is surely no reason that with checks in place that they cannot be rehomed safely in the UK. Please lift the ban!

The Government responded to this petition on Wednesday 24th August 2022

Great Britain has suspended the commercial import of dogs, cats and ferrets from Belarus, Poland, Romania or Ukraine due to the potential risk to human and animal health and cases of non-compliances.

Rabies is a lethal disease in unvaccinated people and animals. We are very lucky in this country to be rabies free – and it is very much in the interests of humans and animals here that we protect our disease-free status and therefore the population.

Ukraine officially reports around 1,800 cases of rabies every year in companion animals, domestic animals and wildlife. It is likely that many more cases, particularly in wildlife or stray dog populations, go unreported. We also know, due to the current situation in Ukraine, that many animals have been displaced to neighbouring countries.

In addition to rabies, there are other diseases of concern in animals from these countries, including Echinococcus multilocularis, a tapeworm that poses a serious disease risk to humans following contact with infected dog faeces. Great Britain is currently free of this tapeworm.

As a government, we are doing everything we can to support Ukrainian refugees fleeing to this country, including those who wish to travel with their family pets. That means we’ve put testing, quarantine, and support in place to help refugees bring their own pets with them.

At the same time, we know commercial consignments of pet animals from Ukraine are being moved into neighbouring countries such as Poland, Romania, and Belarus. These consignments include strays, rescue and abandoned animals. Unlike genuine household pets accompanying Ukrainian refugees, these animals often have an unknown history and disease status, which increases their risk of disease spread. There is also a history of non-compliant movements of such rescue animals into Great Britain from this region, which further increases the biosecurity risk.

The Government appreciates the work of rescue and rehoming organisations who work to ensure that unwanted and abandoned animals are given the opportunity to find a forever home whilst complying with our animal health and welfare legislation. That is why this is only a temporary measure, to ensure that we protect our biosecurity at this challenging time. Given the consequences of getting this wrong, I hope you will understand why we are being cautious. We would encourage organisations which are temporarily unable to import rescue dogs, cats, and ferrets into Great Britain to provide help and assistance to animals in situ.