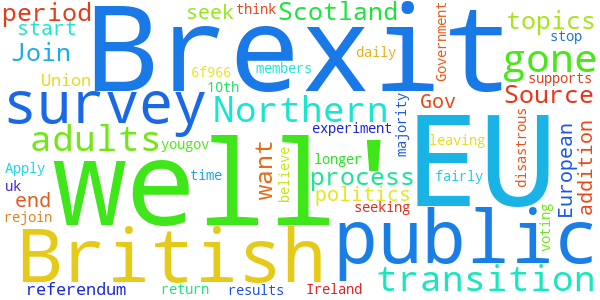 Submitted by Oliver Romain on Saturday 14th May 2022

We want the Government to start the process of seeking to rejoin the EU. Only 2% of the public think that Brexit has gone 'very well' and only 15% 'fairly well' since the end of the transition period*.

We believe the majority of the British public no longer supports Brexit, in addition to Scotland and Northern Ireland voting against leaving the EU in the 2016 referendum. It's time to put a stop to this disastrous experiment and seek to return to the EU as full members.

The Government responded to this petition on Wednesday 9th November 2022

The UK has left the EU, fulfilling the Government’s commitment to take back control of our money, border and laws. This delivers the result of the 2016 referendum.

The referendum was UK-wide – Scotland, Wales and Northern Ireland are constituent parts of the UK.

At the end of 2020, the UK concluded the TCA with the EU. This is the first time the EU has agreed complete tariff-free, quota-free access in a free trade agreement. The agreement is based on cooperation between sovereign equals, centred on free trade, while establishing close cooperation in areas like transport, digital, and fighting crime.

Since 31 December 2020, the UK has been outside the EU’s customs union and Single Market, fulfilling manifesto commitments to take back control of our laws, borders, money and fisheries.

Our focus is now on implementing this agreement, ensuring that it delivers for our citizens and businesses, and building on our relationship with Europe outside of the EU.

This is the beginning of a new chapter for the UK. We have the freedom to do things differently - and better. The UK is going further and faster to protect our natural environment and tackle climate change, whilst bringing in a global points-based immigration system focused on talent and skills, making it easier for the brightest and best to live and work in the UK.