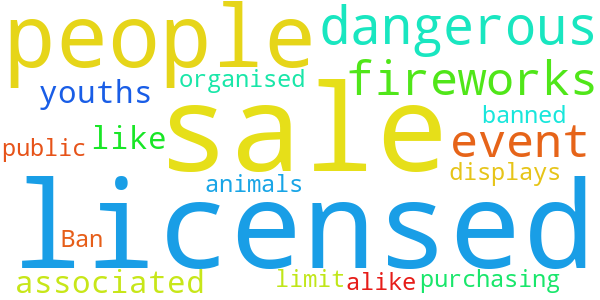 Submitted by Richard Greaves on Wednesday 18th May 2022

We would like the sale of fireworks to anyone but an organised licensed event to be banned.

It is more dangerous to have people not associated with a licensed event purchasing them. It is dangerous for people, youths and animals alike.

The Government responded to this petition on Tuesday 15th November 2022

The Government has no current plans to ban the sale of fireworks to the public but continues to monitor the situation. We believe the majority of individuals use fireworks safely and appropriately.

The Government endorses the considerate use of fireworks, and we recognise that people want to enjoy fireworks, while reducing the risks and disturbances to individuals, animals, and property.

Existing legislation controls the sale, availability, and use of fireworks. For example, there is an 11pm curfew in place for the use of fireworks, with later exceptions only for the traditional firework periods of November 5th, Diwali, New Year’s Eve and the Chinese New Year. Using fireworks outside the curfew hours is a criminal offence enforced by the police and can lead to imprisonment and a substantial fine.

Legislation also restricts retailers to only selling consumer fireworks during seasonal celebrations as those set out above and even then, retailers may still need a licence, depending on the quantity they wish to store and sell. Retailers may only supply fireworks outside these traditional periods if they obtain a specialised licence from their local licensing authority. Local authority trading standards work with retailers to ensure fireworks sold are safe, and they have powers to enforce against those who place non-compliant fireworks on the market. Trading standards (and local fire and rescue authorities in metropolitan counties) can also enforce against those selling fireworks without an appropriate licence.

A number of organisations provide advice and guidance to enable people to use fireworks safely and appropriately. However, where local issues are identified, councils and the police have the powers they need to protect the public from misuse and harm.