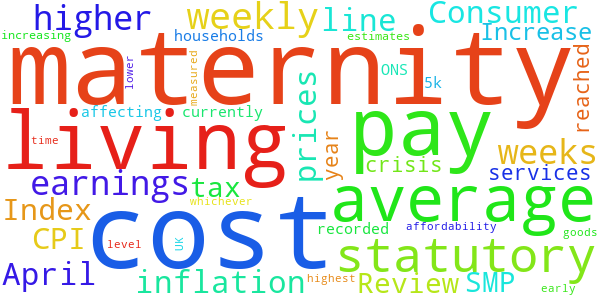 Submitted by Nicola Black on Monday 23rd May 2022

The cost of living has been increasing across the UK since early 2021 and in April 2022, inflation reached its highest recorded level, and the ONS estimates that it is now higher than at any time since around 1982, affecting the affordability of goods and services for households.

Consumer prices, as measured by the Consumer Prices Index (CPI), were 9.0% higher in April 2022 than a year before

The Government responded to this petition on Monday 13th June 2022

The Government has no plans to increase Statutory Maternity Pay (SMP). The standard rate of SMP is reviewed annually and is generally increased in line with CPI.

The standard rate of SMP is considerably higher than the level of other out of work benefits and reflects the special position of pregnant working women and new mothers.

When considering calls to increase the level of SMP, this must be balanced against limited resources as well as being mindful of the burden on employers, who (with the exception of small employers i.e. those with gross National Insurance liability of £45,000 or less in a tax year) are required to cover 8% of the SMP costs. If changes to the rate of SMP outside of the annual review of uprating were to be made, payroll providers and employers would need sufficient time to amend, test and distribute any system changes needed to reflect the new rate.

Government already spends approximately £3 billion a year on maternity payments. Any changes to the rate of SMP would have to take account of economic circumstances and affordability for taxpayers and could not be made without consultation with businesses and other stakeholders.

The Government has no plans to increase the rate of SMP outside of the annual review of uprating.

More broadly, the Government recognises millions of households across the UK are struggling to make their incomes stretch to cover the rising cost of living. That is why we recently announced more than £15 billion in further support, targeted particularly on those with the greatest need. This package is in addition to the over £22 billion announced previously, meaning support for the cost of living now totalling over £37 billion this year. Almost all of the eight million lowest-income households will get at least £1,200 of one-off support in total this year to help with the cost of living, with all domestic electricity customers receiving at least £400. On top of the various cost of living payments, the Household Support Fund has been extended through next winter and offers £1.5 billion to the households most in need.