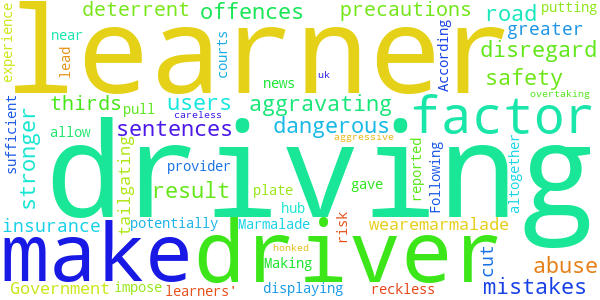 Submitted by Alexandra Johnson on Tuesday 24th May 2022

The Government should make disregard for the safety of drivers displaying an L-plate an aggravating factor in dangerous driving and careless driving offences. This would allow courts to impose stronger sentences on drivers who do not take sufficient precautions when driving near learner drivers.

According to learner insurance provider Marmalade, (https://www.wearemarmalade.co.uk/driver-hub/news/dangerous-driving-around-learner-drivers), 81% of learner drivers experience abuse from other road users. As a result, 72% make more mistakes, potentially putting them & other road users at risk. Two thirds of learners reported tailgating & aggressive overtaking, 44% being cut-up & 59% honked at. Following abuse 49% had to pull over & 8% gave up driving altogether.

Making such reckless driving around learners an aggravating factor should lead to stronger sentences and a greater deterrent.

The Government responded to this petition on Friday 16th September 2022

The Government is committed to road safety, by identifying and prosecuting the few who make our roads less safe. Aggravating factors are set out in the sentencing guidelines.

The law is clear in the Road Traffic Act 1988 and set out in Rule 144 of the Highway Code that drivers must not drive dangerously, without due care and attention or without reasonable consideration for other road users.

The Government keeps the road traffic offences under review, and the Department for Transport is planning to publish a call for evidence on motoring offences. Its scope and timings are still being worked on, but it is expected to include aspects of drink and drug driving and failure to stop and report. There will be an opportunity to raise other matters.

In respect of sentencing guidelines for the courts to follow, the Sentencing Council for England & Wales is an independent non-departmental public body that has responsibility for developing and monitoring the use of these. The courts must follow any relevant sentencing guidelines, unless it would be contrary to the interests of justice to do so.

The Council launched a consultation on 7 July on draft new and revised sentencing guidelines, including those for causing serious injury by dangerous driving, and by careless driving. This consultation closes on 29 September, and we would invite individuals to share their views with the Council. The consultation can be found here: https://www.sentencingcouncil.org.uk/publications/item/motoring-offences-consultation/

When deciding what sentence to impose, courts must consider the full circumstances of the case, including the culpability of the offender, the harm they caused or intended to cause, and any aggravating and mitigating factors. Any factors which aggravate the offence may already be taken into account when passing sentence.