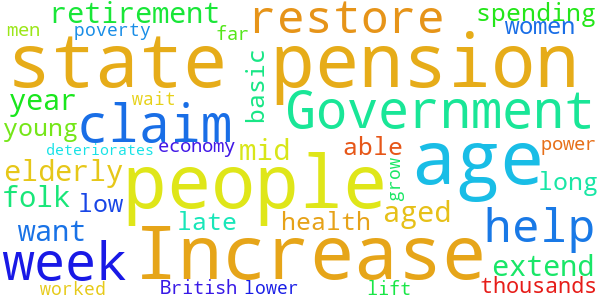 Increase State pensions to £380 a week, and lower retirement age to 60

Submitted by Michael Thompson on Monday 30th May 2022

Increase State pensions to £380 a week, and lower retirement age to 60

The British State pension is far too low. We want the Government to increase the basic state pension to £19,760 a year (£380 a week), and extend this to anyone aged 60 or over. This should lift thousands out of poverty, and give our elderly folk more spending power and help grow the economy.

The Government responded to this petition on Wednesday 21st September 2022

The Government is committed to a decent State Pension as the foundation of support for people in retirement.

The Government spends over £134 billion each year on benefits for pensioners, including over £110 billion on the State Pension. This is likely to increase substantially in 2023/24. This proposal would add significant costs and make the system unsustainable, creating additional burdens on the working age population.

The Government is committed to alleviating pensioner poverty. There are 400,000 fewer pensioners in absolute poverty (both before and after housing costs) than in 2009/10.

Around 1.4 million of the most vulnerable pensioners also receive some £5 billion of Pension Credit, which tops up their retirement income and is a passport to other financial help such as support with housing costs, council tax, heating bills and a free TV licence for those over 75.

Pension Credit is a means tested benefit and provides a top up for people of State Pension age to a weekly minimum amount, (currently £182.60 for single people and £278.70 for couples). These amounts may be higher for those with caring responsibilities, a severe disability or certain housing costs. This approach ensures that spending is targeted at those most in need. Information about Pension Credit is available from the Government website – www.gov.uk - by entering ‘Pension Credit’ into the search bar.

The Government has also acted to protect pensioners against the current Cost of Living situation. This includes a £650 Cost of Living Payment to more than 8 million low-income households on Universal Credit, Tax Credits, Pension Credit and legacy benefits, with separate one-off payments of £300 to pensioner households (through and as an addition to the Winter Fuel Payment) and £150 to individuals receiving extra costs disability benefits.

Raising State Pension age (SPa) in line with life expectancy changes has been the policy of successive administrations over many years. These changes to SPa were made over a series of Acts by successive governments from 1995 onwards, following public consultations and extensive debates in both Houses of Parliament.

We have no plans to reverse changes to SPa. Our reforms have focused on maintaining the right balance between affordability, sustainability of the State Pension, and fairness between generations. The latest Office for National Statistics data shows that the number of people over SPa compared to the number of people of working age is expected to increase.

This Government is committed to providing a financial safety net for those who need it, including when they near or reach retirement. Support is available through our benefit system to those who are unable to work or are on a low income but are not eligible for pensioner benefits because of their age.