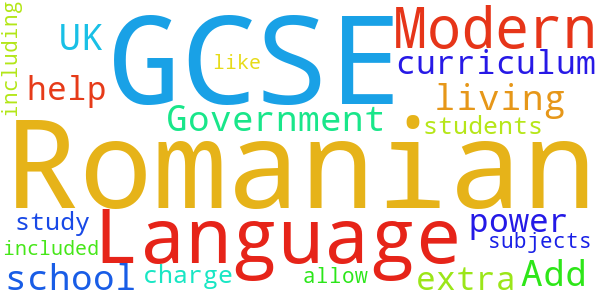 The Government should add Romanian to the languages included in the GCSE Modern Languages curriculum. This would allow students, including Romanians living in the UK, to study the language in school. This should help the many Romanians in the UK who would like an extra GCSE.

The Government responded to this petition on Friday 22nd July 2022

It is for schools to decide which languages they teach as part of their curriculum, and for exam boards to consider which languages have sufficient demand for a GCSE to be made available.

It is up to individual schools to decide which languages are taught as part of their curriculum, both at primary and secondary school, and the government does not specify which languages should be taught or how to teach them. When deciding which languages to offer their pupils, schools are likely to consider the needs of the community in which they serve. Schools would be able to offer pupils Romanian as a language option, if they thought there was sufficient demand to do so. Additionally, deciding in which languages a GCSE is available, is the responsibility of exam boards.

The Government is committed to increasing the number of pupils studying languages to GCSE level, including languages that are commonly spoken in modern day Britain. It is for this reason that teaching of languages is in the national curriculum from age 7 to 14, and why GCSEs in languages are included as part of the English Baccalaureate (EBacc) suite of subjects.

At present, there is no GCSE in Romanian. Exam boards can produce a GCSE in any modern language, and this decision would be informed by a number of important factors, including the level of demand from schools and the proportion of the population in England speaking the language (the 2011 census showed there to be 66,496 people who recorded Romanian as their main language, this translates to approximately 0.1 percent of the population in England [https://www.ons.gov.uk/peoplepopulationandcommunity/populationandmigration/populationestimates/datasets/2011censuskeystatisticsandquickstatisticsforwardsandoutputareasinenglandandwales#:~:text=2011%20Census%3A%20QS204EW%20Main%20language%20(detailed)%2C%20local%20authorities%20in%20England%20and%20Wales%20(Excel%20sheet%201003Kb)]).

Therefore, there is no reason in principle why a GCSE in Romanian could not be introduced, and the Government would support any exam board wishing to do so. This is, however, at the discretion of exam boards.

There are currently nineteen GCSEs in different modern languages produced and currently offered by exam boards in England. The specification for these qualifications must meet the Department for Education GCSE subject content requirements for modern languages, last published in 2015 (and updated in 2022 for French, German and Spanish – for first teaching in 2024), and are accredited by the independent qualifications regulator, Ofqual.

The Government recognises the importance of language learning. Studying a language can be extremely rewarding and exciting, providing an insight into other cultures and opening the door to travel and a wide range of employment opportunities. Languages can also broaden pupils’ horizons, helping them flourish in new environments and, in many cases, increase community cohesion.