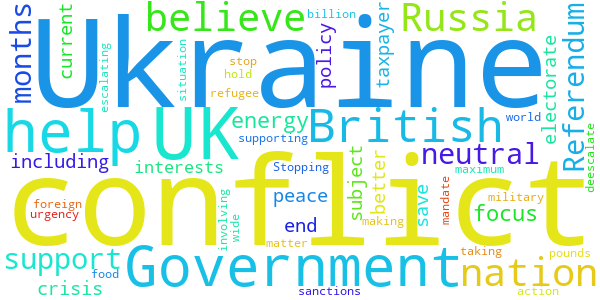 The Government, as a matter of urgency, to hold a UK-wide referendum on the subject within a maximum of six months.

The Government is involving the UK in a foreign conflict, supporting one nation against another nation, without a mandate from the electorate.

We believe it is in British interests to be neutral on the Ukraine/Russia conflict, and not support Ukraine or take any action against Russia, including sanctions.

Stopping British military support to Ukraine will save the UK taxpayer over a billion pounds, and could help stop escalating the conflict.

We believe the British government should focus on peace making, without taking a side in the conflict. This could better help end the refugee crisis than current policy, and help deescalate the world energy and food situation.

The Government responded to this petition on Tuesday 29th November 2022

Russia’s invasion of Ukraine is an illegal act of aggression against a sovereign state, condemned by three quarters of the UN membership. The UK will continue to support Ukraine to defend itself.

Russia’s invasion of Ukraine is an unprovoked and illegal attack against a sovereign democratic state. The UK cannot be neutral about this egregious violation of international law. Instead, we and our international partners are united in condemning Russia’s actions. At the UN General Assembly last month, 143 states voted to condemn Russia’s attempted annexation of sovereign Ukrainian territory. Just 4 states voted with Russia (North Korea, Belarus, Syria, Nicaragua). The UK Government is proud to stand with the international community against Russia’s naked aggression – and for freedom, democracy and the sovereignty of nations around the world.

The UK Government is also clear that it is Putin and the Russian Government that are to blame for the far-reaching consequences of the invasion of Ukraine. As well as being a clear assault on the global principles of sovereignty and territorial integrity, Russia’s brutal war has caused a massive humanitarian crisis in Ukraine and the region. Russian attacks on civilian targets in Ukraine continue to cause suffering on a daily basis.

Russia’s invasion of Ukraine is a threat to us all. It has caused serious shocks to global energy markets and led to increasing prices across Europe. The UK Government is taking action to support British consumers and businesses cope with the impact of rising energy costs. The Russian invasion has also had wider global economic impacts, particularly on food prices. Putin’s claim that these are caused by Western sanctions is false, and intentional Russian disinformation. It was Russia’s cynical blockade on Ukrainian grain exports that has fuelled hunger and exacerbated humanitarian crises in areas already suffering, like the Horn of Africa.

In this context, the UK will continue to work together with our Allies to help Ukraine to defend itself against Russian aggression, and to bolster wider European security and stability.

The UK has committed £2.3bn of military support to Ukraine this year. That support, including the new provision of air defence capabilities to protect Ukrainian civilians from growing Russian missile and drone attacks, will enable Ukraine to defend itself against Russia’s brutal attacks and to push Russian armed forces from sovereign Ukrainian territory.

We are also supporting Ukraine with £220m in humanitarian assistance. And we are providing £174m in economic support for energy infrastructure and in fiscal grants, plus guarantees unlocking £1.3bn of World Bank and European Bank for Reconstruction and Development (EBRD) lending.

The UK Government is resolutely committed to continuing its support of Ukraine. In the eight months since Russia began its unprovoked, illegal invasion, Ukraine has shown extraordinary resolve in resisting Russia’s assault – and is now pushing Russian forces back from Ukrainian territory. The steadily changing map shows that Ukraine has the capability to defeat the Russian invasion, if we provide it with the support to do so.

It is for the democratically elected Ukrainian government to decide when and on what terms it would enter negotiations with Russia. But there is currently no indication that Putin is serious about negotiation; for genuine negotiations to take place, Russia must first cease shelling the Ukrainian people and halt its military operations. Ensuring that Ukraine is in the best possible position to negotiate at the appropriate time will require continued UK and international action and a broad range of diplomatic, military, economic and legal support.

On the basis set out above, the UK Government does not support holding a referendum on the UK’s position towards Russia and Ukraine. The Government is strongly committed to supporting Ukraine and holding Russia to account for its illegal invasion.

This is a revised response. The Petitions Committee requested a response which more directly addressed the request of the petition. You can find the original response towards the bottom of the petition page (https://petition.parliament.uk/petitions/617939)