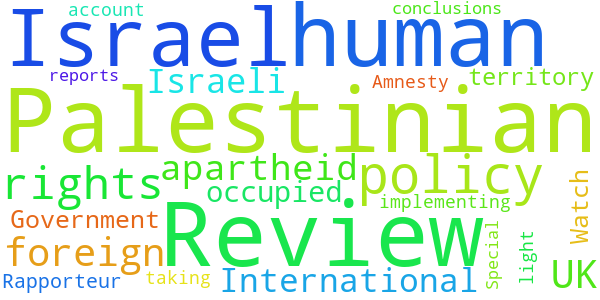 The Government must review UK foreign policy towards Israel, taking into account the conclusions by Amnesty International, Human Rights Watch, and the UN Special Rapporteur for human rights in the occupied Palestinian territory, that Israel is implementing a system of apartheid against Palestinians.

The Government responded to this petition on Friday 5th August 2022

The UK is committed to advancing the Middle East Peace Process. We are aware of these reports, and do not agree with the terminology used within them.

The UK’s position on the Middle East Peace Process is clear and longstanding: we support a negotiated settlement leading to a safe and secure Israel living alongside a viable and sovereign Palestinian state; based on 1967 borders with agreed land swaps, Jerusalem as the shared capital of both states, and a just, fair, agreed and realistic settlement for refugees. Resuming meaningful bilateral negotiations, with international support, is the best way of getting to an agreement.

We believe that negotiations will only succeed when they are conducted between Israelis and Palestinians. The UK has urged the Government of Israel and the Palestinian Authority to work together to meet their obligations under the Oslo Accords, and to work towards a sustainable solution to the conflict. We also call on all parties to abide by International Humanitarian Law and to promote peace, stability and security.

As a friend of Israel, we have a regular dialogue with the Government of Israel. This includes encouraging the Israeli government to do all it can to uphold the values of equality for all. Minister for the Middle East, Amanda Milling, emphasised this point in her recent meeting with Israeli Deputy Foreign Minister Roll during her visit to Israel and the OPTs.

The security situation on the ground is fragile. We urge Israel to exercise restraint and avoid taking unilateral actions that make peace more difficult to achieve. In our dialogue with the Israeli authorities we have recognised their legitimate need to deploy security measures. Where there have been accusations of excessive use of force, we have advocated swift, transparent investigations.

The UK remains resolute in its commitment to Israel’s security. The people of Israel deserve to live free from the scourge of terrorism and antisemitic incitement, which gravely undermine the prospects for a two-state solution. We were appalled by the recent terrorist attacks against Israeli citizens. There can be no justification for such acts of violence. Every Israeli and Palestinian has the right to live in peace and security.

In line with the UK’s longstanding position, our development programmes in the OPTs work to preserve the prospect of a negotiated two-state solution and to improve the lives of Palestinians throughout the West Bank, Gaza and East Jerusalem. The UK remains committed to supporting development in the OPTs and our work includes technical assistance to support the capacity of the Palestinian Authority, economic development programming to support growth and stability, and humanitarian assistance for Gaza.

The UK has made its position on sanctions clear. We are firmly opposed to boycotts/sanctions in this case. We believe that imposing sanctions or boycotts on Israel or supporting anti-Israeli boycotts would not support our efforts to progress the peace process and achieve a negotiated solution. Peace will only come through negotiations between the parties.

The UK has stood up for Israel when it faces bias and unreasonable criticism. For example, we have voted against resolutions under, and pressed for, the abolition of Item 7 – the standalone item focused on Israel at the Human Rights Council. In line with this policy, the UK voted against the resolution establishing the Commission of Inquiry (COI) following the May 2021 Gaza conflict. The UK could not support an investigation that furthered the Council’s disproportionate focus on Israel by under an overly expansive mandate.

We continue to support balanced resolutions, including resolutions at the UN General Assembly focused on the two-state solution, settlements, demolitions and Palestinian self-determination. We will not hold back from voicing or raising concern about Israel’s actions when warranted.

Israel’s long-standing commitment to democratic values is one of its great strengths as a fellow democracy, and we continue to make clear that a strong, vibrant civil society is in Israel’s own interest. As a friend of Israel, we would be concerned by any developments that may undermine this commitment.

The situation on the ground demonstrates the urgent need to make progress towards peace. We are actively working to encourage the parties to address the drivers of conflict. The UK remains committed to the two-state solution as the best way to bring peace and stability to the region and ensure a comprehensive and permanent solution to the conflict.