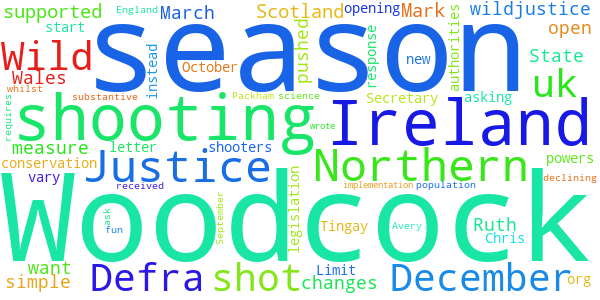 Limit the shooting season of Woodcock

Limit the shooting season of Woodcock

Mark Avery , Chris Packham and Ruth Tingay (Wild Justice) want the opening of the Woodcock shooting season to be pushed back to 1 December. 160,000 Woodcock are shot for fun across the UK whilst their population is declining. The Defra Secretary of State has powers to vary the shooting season.

Wild Justice wrote to Defra and the Northern Ireland authorities in March asking that the Woodcock open season should start on 1 December instead of 1 October (England, Wales & Northern Ireland, or 1 September, Scotland) see letter https://wildjustice.org.uk/woodcock/we-ask-for-changes-to-the-woodcock-shooting-season/ . No substantive response has been received. This simple conservation measure is supported by science, and some shooters, and requires no new legislation for implementation.

The Government responded to this petition on Tuesday 11th October 2022

Defra intends to review the list of species, including woodcock, on Schedule 2 of the Wildlife and Countryside Act 1981 including the benefits of altering the close season.

All wild birds are protected in accordance with the provisions set out in the Wildlife and Countryside Act 1981. Some species of birds, including the woodcock, are listed on Schedule 2 of the Act and may be hunted during the open season. In England and Wales, the open season for woodcock is from 1 October to 31 January. Outside of this period, the close season helps to make sure that woodcocks are able to breed successfully and move between breeding and wintering grounds.

The first breeding woodcock survey was undertaken in 2003 and estimated a breeding population of 78,000 pairs in Britain. A further survey in 2013 estimated 55,000 pairs, representing a decline of 29%. As a result, the woodcock has been on the Red List of Birds of Conservation Concern in the UK since 2015. During winter, our resident birds are joined by migrants from breeding populations in Northern Europe and Western Russia, increasing the Great Britain non-breeding population to 1.4 million individuals.

The reasons for the decline of the breeding population of woodcock in Great Britain are not fully understood but are likely to include: disturbance; habitat loss as a result of land drainage; the drying out of natural woodlands; changes in surrounding woodland management; the maturation of new plantations; and overgrazing by deer. Further work is needed to fully understand the causes of its decline.

Defra is committed to reviewing the protection we afford to wild birds listed on Schedule 2 of the Wildlife and Countryside Act 1981, in particular establishing the evidence underpinning the listing of species such as the woodcock, so we can ensure that recreational shooting is sustainable and does not undermine species recovery. This might include amending the close season for native species such as the woodcock.

Whilst the Department undertakes this review, the woodcock will continue to be supported by a number of measures already in train. We are committed to species recovery in England, and that is why, within the Environment Act 2021, we have set a new legally binding target to halt the decline in species abundance by 2030. Furthermore, Defra published a Nature Recovery Green Paper consultation on proposals to support our ambitions to restore nature and halt the decline in species abundance by 2030. We are considering the responses to the now closed consultation and the Government will publish its response in due course.

The woodcock will benefit from a number of woodland grant schemes funded by both the Countryside Stewardship scheme and the Nature for Climate Fund, some of which specifically target management for declining woodland birds. These grants include the Woods into Management Forestry Innovation Funds, which aim to restore vulnerable woodland habitats, improve biodiversity and conserve threatened species, as well as the England Woodland Creation Offer.

More broadly, environmentally sustainable farming is fundamental to our agricultural transition outside of the EU. We are introducing three environmental land management schemes: the Sustainable Farming Incentive, Local Nature Recovery, and Landscape Recovery. These schemes will pay for activities to create, manage and restore habitats such as woodland, connecting isolated habitats to form networks, and species management, all of which will benefit woodland bird species, such as the woodcock.

This is a revised response. The Petitions Committee requested a response which more directly addressed the request of the petition. You can find the original response towards the bottom of the petition page (https://petition.parliament.uk/petitions/619615)