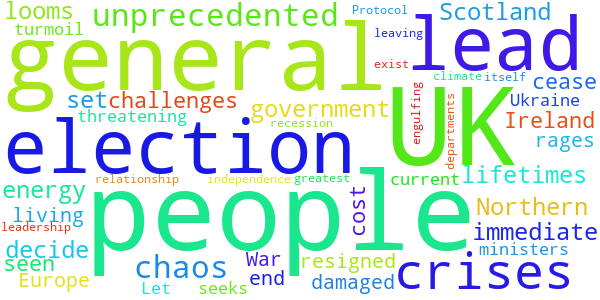 Call an immediate general election so that the people can decide who should lead us through the unprecedented crises threatening the UK.

The chaos engulfing the UK government is unprecedented. Over 40 ministers resigned leaving departments without leadership during cost of living, energy and climate crises. War rages in Ukraine; the Northern Ireland Protocol has further damaged our relationship with Europe; recession looms; the UK itself may cease to exist as Scotland seeks independence. This is the greatest set of challenges we have seen in our lifetimes. Let the people decide who leads us through this turmoil.

The Government responded to this petition on Tuesday 20th September 2022

The UK is a Parliamentary democracy and the Conservative Party remains the majority party. The Prime Minister has pledged to ensure opportunity and prosperity for all people and future generations.

The United Kingdom is a Parliamentary democracy, not a Presidential one. Following the general election of December 2019, Members of Parliament of the governing party (the Conservative Party) were elected, such that there is a majority in the House of Commons. This remains the case. A change in the leader of the governing party does not trigger a general election – this has been the case under governments of successive political colours.

The Dissolution and Calling of Parliament Act 2022 provides that Parliament is automatically dissolved five years after it first meets (unless it is dissolved sooner), otherwise the timing is a matter of discretion for the incumbent Prime Minister (subject to re-established constitutional conventions).

In her speech of 6 September 2022, the new Prime Minister set out three early priorities: to grow Britain’s economy, deal with the energy crisis caused by Putin’s war, and putting the national health service on a firm footing. The Prime Minister is determined to address the challenges the country faces and ensure opportunity and prosperity for all people and future generations.

This petition was debated in Parliament on Monday 17th October 2022