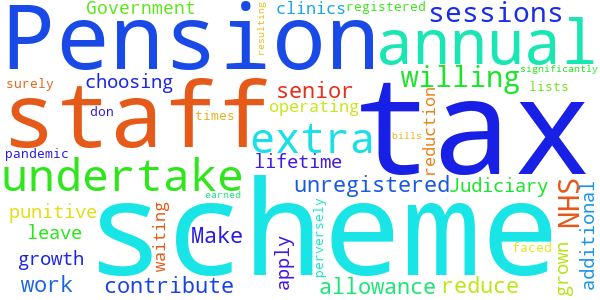 The NHS pension scheme should be ‘tax un-registered’, so the annual allowance and lifetime allowance don’t apply. The tax bills resulting from annual pension growth can leave senior staff choosing to take on LESS work to reduce their tax bill - work they would have otherwise been willing to do.

If the Government made the scheme tax-unregistered (as in the Judiciary Pension Scheme) then senior staff will surely be more willing to undertake extra clinics, extra operating lists and contribute to the reduction in waiting times which have grown significantly since the pandemic.

It is perversely punitive that staff who undertake additional sessions can be faced with a tax bill of more than what they earned for those sessions.

The Government responded to this petition on Wednesday 10th August 2022

The Government has no plans to make the NHS Pension Scheme a tax unregistered scheme. This would not benefit the vast majority of members, who would lose tax relief and a tax-free lump sum.

Pensions tax relief is one of the most expensive reliefs in the personal tax system. In 2019/20, income tax relief on total contributions and National Insurance relief on employer contributions for pension savings cost the Exchequer £61 billion, with around 60% of relief being claimed by higher and additional rate taxpayers.

The annual and lifetime allowances restrict the cost of tax relief and ensure the incentive to save is targeted across society.

The unique circumstances of judicial appointments meant that it was necessary to reform their pension arrangements. Judges are not able to work in private practice after taking up office, and many judges take a significant pay cut to join the judiciary.

The combination of these factors is why the Government introduced a reformed judicial pension scheme.

For members who incur an annual allowance charge, the Scheme Pays facility is a proportionate means of meeting the charge without needing to find funds upfront. On that basis, the Government does not plan to introduce a tax unregistered scheme for the NHS.