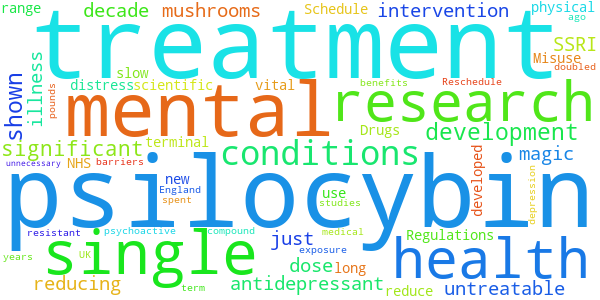 Move psilocybin (the psychoactive compound found in “magic mushrooms”) to Schedule 2 of the Misuse of Drugs Regulations 2001, reducing unnecessary barriers to scientific research which slow the development of new and vital treatments for a range of physical and mental health conditions in the UK.

Antidepressant use in England has doubled over the last decade and 1 in every 10 pounds spent by the NHS is for mental health treatments. There have been no significant developments since SSRI antidepressants were developed more than 50 years ago. One single dose of psilocybin has been shown in studies to reduce the distress of those with terminal illness and treatment-resistant depression. No other intervention has been shown to have such significant long-term benefits after just a single exposure.

The Government responded to this petition on Thursday 20th October 2022

There are no plans to reschedule psilocybin to Schedule 2 of the 2001 Regulations. There is an established process for the development of medicines, including those containing Schedule 1 drugs.

The Government sympathises with patients suffering from distressing conditions and can understand the desire to seek the best possible treatment available.

The Government’s licensing regime for controlled drugs, supported by legislation, seeks to strike a balance that enables legitimate research to take place in a secure environment while ensuring that harmful drugs are not misused and do not get into the hands of criminals. A number of studies into the use of psilocybin as part of the treatment for mental health conditions have been or are being conducted in the UK. However, psilocybin has not yet been granted a marketing authorisation (product licence) by the Medicines and Healthcare Products Regulatory Agency (MHRA) for use as a medicine.

There is an established process for the development of medicines, overseen by the MHRA, which enables medicines (including those containing Schedule 1 controlled drugs such as psilocybin) to be developed, evaluated in clinical trials and licensed based on an assessment of their safety, quality and efficacy before being made available to patients in the UK. The MHRA supports the safe and scientifically sound conduct of trials in this area and also provides regulatory and scientific advice to companies at all stages of developing medicines. Should an application be submitted for a marketing authorisation (product licence), it will ultimately be a decision for the MHRA whether to license psilocybin as a therapy.

If a psilocybin-based medicine is made available following an assessment by the MHRA, the Government will seek and then consider advice from the Advisory Council on the Misuse of Drugs (ACMD) on its scheduling under the Misuse of Drugs Regulations 2001. Such advice is a statutory requirement and will be considered before any decision can be taken on scheduling under the 2001 Regulations.