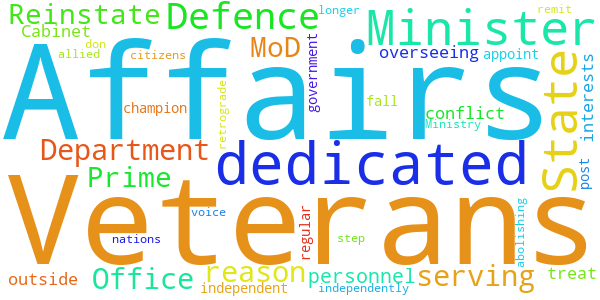 Reinstate a dedicated Minister of State for Veterans’ Affairs

Reinstate a dedicated Minister of State for Veterans’ Affairs

Veterans are no longer serving personnel but regular citizens and do not fall under the remit of the Ministry of Defence. Their interests may often conflict with those of that Department, and they don’t have an independent voice outside of the MoD to champion their affairs across government. Many of our allied nations already treat veterans’ affairs independently from their defence departments for this very reason. We can see no reason for the retrograde step of abolishing this dedicated post.

The Government responded to this petition on Monday 24th October 2022

James Heappey MP is Minister of State for Armed Forces and Veterans, attending Cabinet. The Office for Veterans’ Affairs remains in the Cabinet Office to champion veterans support across government.

As Minister for Armed Forces and Veterans, James Heappey MP attends Cabinet and is responsible for coordinating work across government to champion support for veterans and their families. The Office for Veterans’ Affairs (OVA), which remains in the Cabinet Office, reports to the Minister for Armed Forces and Veterans. The Chancellor of the Duchy of Lancaster, Nadhim Zahawi MP, is the sponsoring Cabinet Office Secretary of State for the OVA, thus bringing further representation of the veterans’ agenda to Cabinet.

The Minister for Armed Forces and Veterans and the OVA are focused on coordinating all functions of the UK Government to ensure the best support for veterans and their families, including by overseeing the delivery of the Strategy for Our Veterans.

It has been a longstanding policy in the UK that the whole of Government is responsible for supporting veterans. For example, the Department of Health and Social care is responsible for veterans’ health matters, and the Department for Levelling Up, Housing and Communities is responsible for housing policy that relates to veterans. Sarah Atherton MP, is Parliamentary Under Secretary of State at the Ministry of Defence with responsibility for those aspects of veterans’ policy which are the direct responsibility of the MoD. This includes: pensions; compensation; transition; the Armed Forces Covenant; legacy support; medals; and Veterans Advisory and Pensions Committees. The Minister for Armed Forces and Veterans will work closely with the Parliamentary Under Secretary of State to ensure the MoD continues to deliver for veterans.